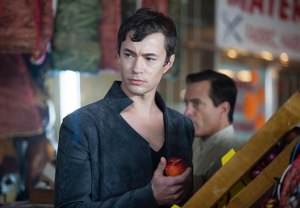 Now that Dominion‘s Alex has set out into the big, bad world, he’s really going to need his guardian archangel, Michael. After all, you aren’t really a Chosen One if nobody’s trying to kill you.

Tom Wisdom, who plays Michael, explains that because Gabriel is aware of Alex’s status, it’s only a matter of time before the rival angel comes after him.

How far will Michael go to protect his charge? Below, Wisdom answers that question, previews tonight’s episode (Syfy, 9/8c), and more.

TVLINE | What can we expect in this week’s installment?
Alex has left Vega. As soon as Michael finds [this] out, he’s going to have to do something about it, because the reason he’s on Earth in the first place is to protect Alex at all costs. He’s got to make sure he’s protected. So he’s going to go after him. TVLINE | How would you describe Michael and Alex’s relationship?
He’s like Alex’s mentor. He’s very hard on him to begin with, but that’s just because he has to get him to a place where he’s able to defend himself. He knows the war is coming so Alex has to be prepared. But [Michael]’s also incredibly fond and protective of him. He just wants the best for him.

TVLINE | How does their relationship develop as the season goes on?
Michael needs to train him some more. He also needs Alex to step up to the plate, to acknowledge the fact that he is the Chosen One. It’s his destiny and his path. Michael can only help guide him. Everything really is in [Alex]’s tattoos, so it’s up to him to decipher those.

TVLINE | How far would Michael go to protect Alex?
He’d give his life [for him], I’d imagine.

TVLINE | What does Michael think about other humans?
He finds it difficult to understand them. I don’t think he gets involved in their politics — or he tries not to. His focus is simply to make sure that Alex can get to a level where he should be. It just so happens that he finds human women very attractive. He’s fascinated by the way humans feel and the way they think.

TVLINE | What else is in store for Michael this season?
Defending Vega and helping Alex along his path. His conflict with Gabriel certainly develops and reaches a crescendo. We learn a lot about Michael in the upcoming episodes. TVLINE | Will we be visiting any of the other strongholds, like Helena?
Maybe not this [season], but if this series carries on, then I would imagine [so].

TVLINE | You did pretty much all the flying and the sword-fighting yourself. What was that experience like?
To have good writing, an interesting character who I love playing and to be able to combine that with the fights and the flying and stunts, I absolutely love it. [It’s a] great job.