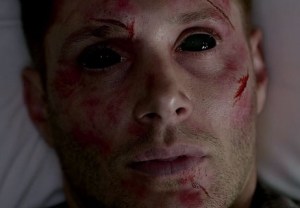 Dark days appear to be ahead on Supernatural.

As the CW series closed out Season 9, Dean was looking at the end of his days on Earth as a human.

RELATED What Happens Next: Why Did Castle Crash and Burn on His Big Day?

Emotionally battered and physically bruised, the elder Winchester once again died in his brother Sam’s arms. Dean, though, is not one to stay on the other side for too long, and before the hour ended, his eyes flew open — completely dark! — as Crowley urged him to “see what I see, feel what I feel.” Now, the man who once hunted demons appears to be facing a “new kind of life,” as the very thing he regularly killed. Could he possibly handle it in a way that’s not self-destructive?

But that was not the only cliffhanger served up by the finale: Up in Heaven, Castiel defeated Metatron, but he still has to contend with the problem of his dwindling stolen grace. Since Misha Collins will be back as a series regular, we can rule out a permanent death via lack of angel juice, so how will Cas manage to survive?

With two imminent issues facing the CW series when it returns for Season 10 on Oct. 7, we invite you rewatch the demonic ending before reviewing our poll options and sharing your predictions for how the cliffhangers will shake out.