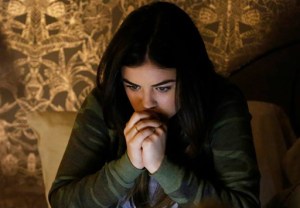 Who killed Mrs. D? Are Aria and Ezra back on? And why isn’t Andrew on every single episode? Though these questions remain, one thing is crystal clear after Tuesday’s Pretty Little Liars: Parents are not to be trusted.

RELATED Pretty Little Liars Recap: Who Do You Think You Are?

BURIED SECRETS | With Toby temporarily out of the picture, Spencer needed another pair of man hands to help with her gardening; enter Andrew, the hot nerd we first met during the most epic game of “strip studying” back when Spencer was riding the crazy train. (See the photo to the right in case you need your memories jogged.) Anyway, Spencer’s gentle gardner stumbled across a container of rat poison, which was suspicious because — as Spencer astutely pointed out — the Hastings have never had a rat problem! To make matters worse, Spence discovered pills containing losartan in her dad’s medicine cabinet, which is the exact substance the coroner attributed to Mrs. D’s death! So is it just a coincidence that Mrs. Hastings was suddenly in desperate need of a spa getaway, or was it all part of Mr. Hasting’s plan to keep her quiet?

GOOD GRIEF | Still racked with guilt over killing Shana, Aria punished herself even further by obsessively re-watching Shana’s funeral online. Honestly, I’m not sure what was creeper: Aria thinking she saw Shana rise out of the coffin, or just the fact that her funeral was online in the first place? I know society is becoming more vain by the day, but do people seriously upload funeral videos now? That’s super dark. Fortunately, Aria’s stress sesh led her straight to Ezra’s apartment for a game of gin and a much-needed speech about accepting things we can’t change. Aria didn’t end up staying the night, but the look on her face when Ezra handed his ex her favorite blanket said it all: These two are definitely headed back to the bone zone. FRIENDLY WARNING | Speaking of ex games, Emily spent quite a bit of time with Paige this week; first during a lunch outing with Sydney, who I still think is secretly crazy, then again during a private meeting in Emily’s backyard. Paige tried to warn Emily not to align herself with Alison when she goes back to school — in the creepiest way possible, mind you — but Emily ended up more confused than anything else. She even went as far as to suggest Alison starts over in a new town, but Ali was hearing none of it. She’ll return to the halls of Rosewood High if it kills her… and let’s face it, it just might!

PULLING HER LEG | When Ali wasn’t busy standing her ground in Rosewood, she was concocting more stories about what really happened to her while she was “kidnapped.” When a doctor asked about a scar on her leg, she said it happened while she was blindfolded; but when Hanna confronted her about the scar after the exam, Ali said she wishes she’d been blindfolded when it happened. (Seriously, though, what did happen?!)

A NEW (OLD) LOOK | As for Hanna, she returned to her roots with a little five-finger discount at the Rosewood Mall. Is this a sign of more bad things to come? Caleb is coming back next week, and following executive producer Marlene King’s promise that one of the girls will spiral “with her boyfriend,” I can’t help but worry about the trouble Haleb will land itself in very soon.

Are you ready to declare Spencer’s parents guilty? Any theories about how Alison got that scar? And would you be willing to sign my petition to make Andrew a permanent PLL fixture? Drop a comment with your thoughts on tonight’s episode below.