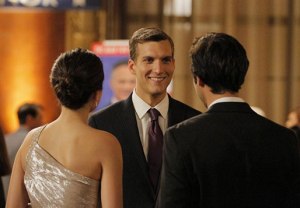 Following their initial (and very literal) run-in, Chasing Life‘s April and Leo are about to collide once again — and this time, Scott Michael Foster tells TVLine, there’s an “exciting” twist involved. Should Dominic be worried?

Below, Foster — who plays Leo, son of gubernatorial candidate Bruce Hendrie — teases his character’s second meeting with April this Tuesday (ABC Family, 9/8c), as well as his complicated relationship with his father.

TVLINE | Does Leo have cancer or is he at the meeting because he knows someone who has cancer?
That is a great question. I’d love to tell you, but I don’t think I want to give that away. [This episode] everyone will find out a lot more about who Leo is and what he was doing at that support group.

TVLINE | Could you tease the episode a little? It looks like April and Leo will finally have a real conversation.
They’re in the support group, so they will meet; you’re [also] going to see them outside of that. Leo’s one of the few people who knows about April’s situation, so there’s going to be a good dynamic there. Starting [this] week, you’re going to know a lot more about Leo, why he is the way he is. You’ll find out who he is and his relationship with April really starts to flourish.

TVLINE | Considering they got off on the wrong foot, how does their second meeting go?
Obviously she knows who he is, but he starts to put together who she is since she’s a journalist and he recognizes her from that. He’s a bit guarded around April at first, [but] they get to start again. TVLINE | How would you describe Leo’s relationship with his father?
As you saw in last [Tuesday’s] episode, he’s a bit of a rich kid who kind of at first glance seems [like he] cashes his inheritance and does what he wants to do. But if you notice, in his first episode he comes roaring in on a motorcycle and leather jacket, not clean-shaven and the next week he’s clean-shaven, with a young Republic haircut and suit, standing by his father, helping with the campaign. So you have to wonder if he’s really there doing that because that’s who he is. The relationship with his father is something you’ll found out a lot about [this] week.

TVLINE | What is Leo really like?
Ultimately he’s a guy who has more going on than seems at first. April will find that out as well — and what he’s doing in the support group. There’s a lot more going on with him, I wish I could tell you but you’re going to have to wait and see.

TVLINE | How would you describe April and Leo’s relationship going forward?
He’s one of the few people that know that she has cancer so [does] she feel like he’s a person she can confide in now, or is she guarded [because] he knows something she doesn’t want him to know? A lot of exciting stuff happens. Their relationship has a lot of cool twists and turns.

TVLINE | Do we get to see the rest of his family as the season goes on?
You’ll see more of his family. His father has a little bit to do with it. And you’ll get to meet his mother at some point. That’s sort of the cool thing about it. When someone’s running for governor, the family has to look picture perfect. But really there’s more going on than that, behind the scenes. So you’ll sort of see behind the scenes and how everyone’s relationship with each other really is.

TVLINE | The episode looks like it’s taking place at Bruce Hendrie’s party. Could you talk about that?
He has this campaign kick-off party and people from the Boston Post will be there covering the story, as well as Leo. He’ll be there in support of his father. Let’s just say some craziness ensues.