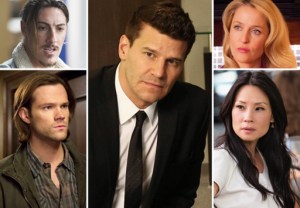 Question: What can you tease about the big changes coming to Bones this upcoming season? —Amelia
Ausiello: Get ready for a mini-Booth in Season 10! Nope, Christine isn’t getting a little brother; Booth is getting a protégé. His name is James Aubrey and he’s an FBI newbie who works as a junior agent under Booth. The casting notice describes the twentysomething hottie as “charming, charismatic, politically ambitious,” a guy who “views everything as a stepping stone to something better — head of the FBI or even President of the United States.” Booth is weary of his padawan’s ambition and is on a mission to get him to simmah down now. Casting for the recurring role is in its early stages, so hit the comments with your suggestions!

Question: Is Season 5 going to be Haven’s last? —Geoffrey
Ausiello: “It very well could be,” Eric Balfour ventured when we saw him at the Saturn Awards. “Nobody at the network’s said that, but we are viewing it that way.” To the point that at least one of the producers “promised that he’s shooting two endings,” one of which will afford proper closure. As Balfour explains, “The writers are of the opinion that you don’t get the opportunity to see the finish line very often on a television series, so knowing that we have the ability to sort of plan for that – and we have [the length of] two seasons to do it, it’s not like it’s tomorrow — I actually am of the opinion that I hope we do it, because I would love to give the fans a real ending and honor the show that way.”

Question: Do you have any scoop for Supernatural season 10? —Shelby
Ausiello: Sure do. The Season 10 premiere, tentatively titled “Soul Survivor,” will introduce the new recurring role of Rowena, a tough but elegant woman who will stop at nothing to reclaim her power base. Here’s the interesting part: Actresses who have or can perfect a Scottish accent are preferred. Hmm… Question: Any juicy scoop about Season 4 of The Killing? —Katrina
Ausiello: Bullet (played by Bex Taylor-Klaus) may be gone, but she will not be forgotten when the six-episode final season drops on Netflix on Aug. 1. According to series creator Veena Sud, the teen’s Season 3 death will continue to haunt Holder. “That was a game-changer in terms of Holder’s life,” she explains. “Up until that point, he was a homicide detective who had not lost anything in the course of his work. So now he’s kind of walking through that crucible that Linden has walked through, that many homicide detectives have walked through.” Sud promises that there will be “a final moment” that will honor the Bullet-Holder relationship. In other Killing news, did you read/see this?!

Question: Where has Anna Camp been on True Blood this season? I need my Sarah Newlin fix! —Jason
Ausiello: My favorite vampire exterminator is back in this week’s episode. And as we told you back in February, the show will be introducing us to Sarah’s Texas socialite parents and angry, bitter, gothed-out sister at some point this season (perhaps as early as Sunday). Question: Any news on what the final season of White Collar will bring? —Michael
Ausiello: Mozzie’s (invisible) better half. In the final season’s fourth episode, we will not only learn that the con man has a wife, but we’ll meet her! Her name’s Eva, and she and the hubs haven’t laid eyes on each other in five years. Should be an interesting reunion.

Question: I’m so excited Rookie Blue is back. Do you have anything to share about my favorite couple, Sam and Andy? —Gina
Ausiello: Episode 6 is going to be a big one for Sam. “You’re really going to get to know him in a way that I don’t think we’ve seen before,” exec producer Tassie Cameron previews. “He’s always been a bit of a man of mystery — he shuts down as opposed to opening up in times of trouble and duress. So we’re trying to show that this is a guy who’s grown, this is a guy who knows what he wants, this is a guy who is trying to be more open with everyone around him, and we’re writing him that way this season.”

Question: I’ve loved Shelley Hennig since her days on The Secret Circle (RIP) and am so excited to see her on Teen Wolf in a major role! I’ve been waiting since spring for any kind of scoop on Malia and what she’ll be up to! Can you share anything?! —Sarah
Ausiello: You’re in luck, Sarah, because next week’s Teen Wolf is a biggie for Malia. In addition to a budding friendship with Lydia, fans can expect a full-on Malia meltdown, as well as a highly anticipated hook-up that may or may not have been teased in the original Season 4 trailer. Get that pause button ready.

Question: You rarely, if ever, talk about The Goldbergs in Ask Ausiello. (Although I loved your John Hughes tribute scoop last week – thanks for that). Got anything else on Season 2? —Ted
Ausiello: The royal wedding of Charles and Diana will inspire Beverly to renew her vows to Murray. Also, in addition to the Hughes-inspired ep, look for homages to seminal ’80s flicks War Games and Footloose. Question: Do you have any scoop on the big revelation in the 100th episode of Pretty Little Liars? —Jon
Ausiello: No! However, Jon, I do have some scoop on a big confrontation between Alison and — wait for it — Caleb! “He doesn’t get too involved in the Alison drama at first,” Tyler Blackburn tells TVLine of Caleb’s plans upon returning to Rosewood next week. “But then he speaks up, and he’s just like, ‘This girl is a liar.'” Caleb vs. Alison? I’m honestly not sure who to root for.

Question: I just binge-watched the whole Witches of East End first season and loved it. Any spoilers for Season 2? —Alicia
Ausiello: How’s this for a spoiler, Alicia: By the end of the July 6 season premiere, you’ll know what came out of the Asgard portal — and I’m not just talking about Frederick.

Question: Any update on whether or not Gillian Anderson will be a series regular on Season 3 of Hannibal? —Gwen
Ausiello: Executive producer Bryan Fuller previously told us he’d “love, love, love” for that to happen — and it turns out he’s not alone. “Oh God. Absolutely!” series star Hugh Dancy responded when asked if he’d welcome more interaction between his addled FBI profiler Will Graham and Anderson’s mysterious psychiatrist Bedelia Du Maurier. “First of all, ‘What are you doing on that plane, Bedelia? Great choice!'” the actor says with a chuckle about Season 2’s closing scene — in which Anderson’s character fled the country (first-class style) with Mads Mikkelsen’s titular cannibal. “As far as anybody could tell, [Bedelia] had vanished off the face of the planet. So, it would be interesting to understand” how she came to be Hannibal’s traveling companion and “what their history is.” As Dancy notes, “Hannibal has this M.O. of taking people and guiding them toward their worse, or as he might see it, better selves. And by and large, they go off and do terrible things and they die. But both with Will and now, Bedelia, [Hannibal] has done that, but also taken much more interest in them.” Dancy adds he’d like to see — given their parallel relationships with Dr. Lecter — whether or not Will can use Bedelia for leverage. In other words, cross your fingers and toes that Anderson’s name appears in the opening credits come fall.

Question: Got anything on Elementary? —Chris
Ausiello: The Oct. 30 season premiere, titled “Enough Nemesis To Go Around,” will find Watson playing cat-and-mouse with a cunning (and female) drug kingpin. The character, Allison, inherited control of a narcotics cartel from her dead hubby and is really relishing staying one tiny step ahead of JW. (Something tells me the tables are about to turn.)

Question: When will we know if Orphan Black has been renewed for a third season? —R. Downey
Ausiello: I hear a pick-up is imminent. Here’s a little tidbit to tide you over: Helena may have torched the Proletheans’ farm, but, remember, Henrik’s wife was not home at the time. “Bonnie is still at large, that is true,” confirms cocreator Graeme Manson. “And we do like Kristin Booth, who plays Bonnie.” In other words, don’t be surprised if the Prolethean threat resurfaces. “They’re much reduced,” notes the EP, “but an angry Prolethean is a scary thing,”