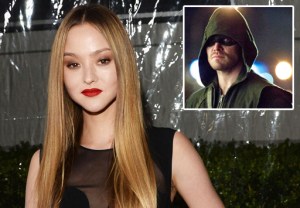 Oliver Queen is getting a new mentor when Arrow returns for its third season. Will he end up hot for teacher?

RELATED Gotham to Premiere at Comic-Con — Plus: Arrow, Flash and More Previews

Aoki’s character — the wife of Oliver’s Hong Kong-based teacher and handler — will be seen in flashbacks, along with her husband, and will play a “critical” role in Oliver’s journey to becoming the Arrow. It’s not yet known whether Tatsu will also appear in present-day Starling City.

(Fun fact: Aoki’s brother Steve appeared as himself in a Season 1 episode of Arrow, DJ-ing the opening of Verdant.)