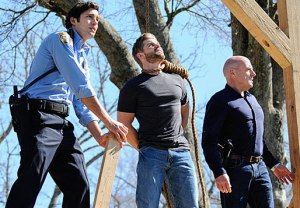 Show of hands: Who thinks Stephen King should pen all future Under the Dome scripts?

Although CBS’ adaptation of King’s sci-fi thriller often struggled to provide continuity and/or general suspense in its freshman season, Monday’s Season 2 premiere — written by King himself — brought the show back to its roots: a little creepy, a little confusing, but wholly entertaining.

Let’s recap what went down on our first visit back to Chester’s Mill:

RELATED  3 Wishes for Under the Dome Season 2

COME ON BARBIE, LET’S GO PARTY | Picking up where last season’s finale left us, the entire town is still eager to see Barbie hanged, but a sudden flash of white light from the dome delays things, causing onlookers to drop to the ground, unconscious. Linda suggests they take a trip to the dome to see what’s really going on, and upon arriving at the barrier’s edge, they realize it’s become magnetized. Keychains, guns and Barbie’s handcuffs — which are still, you know, attached to him — fly toward the dome. In a moment of self-sacrifice, Linda uncuffs Barbie but can’t move away from the dome fast enough before an oncoming car crushes her against the glass. (RIP Linda. I’d like to say you’ll be missed, but it’s probably for the best that you’re done with this mess. Plus, death does wonders for your hair!)

Barbie happens upon a high school science teacher, Rebecca Pine, who’s been (gasp) studying the dome since it came down and has noticed it’s messing with the electromagnetic frequencies in town — including people’s brains, which explains why more townspeople collapse every time a pulse of light emanates. The only solution, it seems, is to create a giant magnet in the center of town that can negate the dome’s electromagnetic current. (Or in the words of one Jesse Pinkman: Magnets, bitch!) The two construct the magnet from a giant fire tower — with the help of Norrie, Joe and other townspeople — but the charge can’t quite overcome the dome’s pulses.

CABIN IN THE WOODS | As Julia walks away from the lake where she tossed the all-knowing egg, a woman appears out of nowhere, thrashing in the middle of the water. Julia — who’s recovering from a gunshot wound, lest we forget — swims out and brings the girl to safety. She’s helped by a newcomer named Sam Verdreaux (played by CSI: NY‘s Eddie Cahill), who’s been holed up in a cabin while the dome has wreaked havoc this whole time. He and Julia bring the rescued woman to his place, where he informs Julia that he’s 1) a doctor who was put of work due to a drinking problem and 2) he’s been living in this cabin ever since his sister committed suicide a while back. After the two bond, they notice The Girl From the Lake has disappeared. While Julia goes to look for her, Sam looks through an old journal, presumably of his sister’s, that contains prophetic images of the dome and its powers — including a drawing of The Girl From the Lake. Which can only mean good things, right?

MOMMIE DEAREST | Just as Barbie & Co. put their magnet to work, another pulse from the dome causes more people to collapse, including Angie and Junior, who were on their way to the police station for a gun that could kill Big Jim. (Did they fail to realize the gun would instantly be magnetized to the dome? Yes, apparently.) While Junior is unconscious, he dreams of encountering his mom on the streets of Chester’s Mill, who tells him she never meant to abandon him. (Hi, Dr. Lewis!)

THE BIG JIM SHOW | While every piece of metal is getting stuck to the dome, Big Jim takes to the storm shelter to retrieve more guns. There, he runs into the ghost of Dodee, who says cryptic things like, “You’re not listening, but you will” and ominously sticks her finger right into the gunshot wound Big Jim gave her. Ick. Big Jim chooses to ignore Dodee’s warnings of his selfishness, choosing instead to say, “Shut up and be dead!” (Good comeback, dude.) After he finds his way out of the shelter, the newly deceased Linda visits him next, telling him he must sacrifice himself for his son. And he almost does! In a moment of altruism, Big Jim sticks his head in the noose meant for Barbie and is ready to off himself… until Julia and Barbie, newly reunited, stop him. When Julia won’t pull the lever to hang Jim, he stomps through the floorboards until they give out, and it’s only Julia’s last-second cutting of the rope that saves the lug’s life. “The dome doesn’t want us to kill you,” Julia says, and as the dome’s fog clears, the townspeople come to and the magnetic force is released. “It wants us to stop the killing.” Cue Big Jim’s self-satisfied smirk that he’s not only alive, but things are returning to normal. Or, whatever normal is in this town.

TWIST OF FATE | The last 10 minutes of the episode pull no punches, and they finally feel like something out of a Stephen King novel. First, Sam Verdreaux visits the town diner, and Junior reveals that Sam is his uncle. Junior is unhappy that Sam has resurfaced and assumes it has something to do with the vision he had of his mom — which of course Big Jim waves off, because Big Jim is the worst. But it turns out Junior’s mom isn’t exactly dead and gone: As we see moments later, she’s living in a big city outside Chester’s Mill, painting (as she does) and watching (rather blasé) news reports about the supernatural dome that has encased a random town.

Then, in perhaps the most unsettling moment of the premiere, Angie encounters The Girl From the Lake and follows her into the local school. The girl looks frightened and runs off down the hall, leaving Angie to look inside a suspiciously ajar locker — before a character we don’t get to see swings down a giant axe and murders her. (RIP Angie. This one is way more genuine than my sentiments about Linda.)

What did you think of Dome‘s return? Grade the episode via the poll below, then hit the comments with your thoughts!