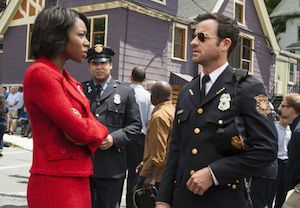 HBO’s new rapture drama The Leftovers drew a solid (but far from spectacular) 1.8 million viewers in its Sunday debut — but how many of those potential believers will flock to Episode 2 next week? (TVLine readers gave the super-sized — and unabashedly bleak — opener a lukewarm B-.)

Leading into The Leftovers, the sex-tacular second episode of True Blood‘s final season averaged 3.1 million viewers, down 25 percent from the 4 million that turned out for last week’s premiere.