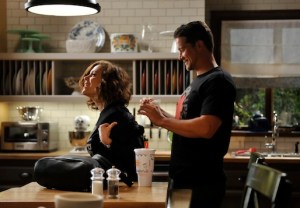 Questions that popped into my head during this week’s episode of Mistresses:

* Is Karen’s wig going to remain in tact during her hasty hotel hookup? (Let’s hope that sexy stranger’s not a hair-puller!)

* Can people regularly indulge in delicious ice-cream sundaes and still maintain sweet, sweet bodies like April and Daniel? (I’ll believe anything you tell me, Dr. Oz!)

* Are all of the shoes in Scott’s fetish closet the same size? (Thank you, Mistresses writers, for clearing up that matter in a timely fashion.)

* And how come Savi left a delicious half of a bagel — already smeared with cream cheese — at her office breakfast buffet just because Dom wanted a private meeting in his office?

I know, I know… None of these queries address the latest, messy life decisions of our four central heroines, but sometimes it’s easier to focus on the mundane than to convene an intervention and ask, “WHAT EXACTLY ARE YOU DOING WITH YOUR FUTURE, SAVI DAVIS? And how exactly is that giant neck tattoo going to get you back in good standing at your stuffy law firm?”

With that question screamed into my TV set, let’s recap the action from the hour, while raising key questions about each of our titular Mistresses.

SAVI | Savi (who’s definitely not conservative when she pours herself a vino) reveals to Joss that she’s been spending more and more time with Zack — AKA Hottie With Whom She Shared a Car Wreck, and May Be About to Share a Train Wreck. But when Savannah comes home from a Red Hot Chili Peppers concert with a big-ass neck tattoo, Joss asks a very pertinent question: Would Dom find the ink sexy if he knew she’d gone out and gotten it with another man? And Savi’s all, “Whatevs.” (Not literally “Whatevs,” but emotionally, y’know?) The Curious Case of Savi’s Indifference continues at work, where she reacts to news from Dom that a coworker has reported their relationship to HR — and that she’s been taken off his cases — with a chipper, “I’m late for my lunch with Karen!” But it turns out that lunch is more of an intervention, where April, Joss and Karen try to find out why their pal has been so distant. Savi says something unconvincing about how she’s discovering parts of herself she never knew — and apparently, one of those parts allows her to cruelly give Joss the silent treatment for daring to care about her well-being. The episode ends with Savi returning to the freeway for the first time since her accident, and it’s Zack who’s sitting next to her, grinning, as she presses the accelerator. (Not a euphemism, but it might be if they advance past the “fist-bump” stage of their relationship.)

Key questions: How come none of Savi’s friends ever ask about the baby she lost in the accident — and how she’s coping with the loss? When Toni dismissed Dom’s threats to stop her from ever making partner, was her comeback another step toward seduction or the opening salvo in an all-out corporate war? And is there any truth to Savi discovering new sides of herself — or is this total delusion happening?

KAREN | Our sometimes therapist continues trolling hotel bars wearing hot wigs and ridiculous aliases —  “pre-school teacher named Joan”? Not with that hemline, sister! — and finally confesses her “mo-tel, ho-tel Holiday Inn” secret to April, who’s all “Say whaaaat?” When Karen admits she’s done the roleplay thing three or four or maybe nine times, April states the obvious: “Deep down you know this can’t end well. Which is probably why you’re telling me about this now — so I can tell you to stop.” But since Karen doesn’t know any better way to spend a night at home than shopping online for staple-removers — has she never heard of Netflix? Or The Good Wife on demand? — she winds up back on the prowl, spouting escort-speak like, “Paris should be all about pleasure!” and ridiculata about how she buys perfume when she travels so the scent of the city stays with her. Snap poll: Is Karen high on Ecstasy? No, seriously! On Alias No. 11 or 12, she finally accepts a hotel room key — that, my friends, is a euphemism — from a hot stranger.

Key questions: Was it the switch from Chardonnay to vodka martini that got Karen to finally succumb to her sexual fantasy? And what are the chances that the California Board of Psychiatry will eventually be seeking a subpoena to examine the lobby and elevator security tapes from the hotel in question?

APRIL | This just in: Ryan Gosling bought a mug at Maison Par la Mer! And that’s just the start of April’s Sexiest Week Ever. While she’s grilling corn on the cob in her to-die-for home, Daniel is sculpting mashed potatoes with her daughter Lucy. “I love Daniel,” the adorable moppet shares. “Really? I think I love him, too!” says April. And it’s kind of awesome — ’til we see Daniel, looking totally vexed (maybe even angry) as he eavesdrops from the top of the stairs. Later, over ice-cream sundaes at home, Daniel drops an “I love you too” — admitting he’d overheard April’s confession. When the camera cuts away from a very steamy makeout sesh, I expect their ice-cream to be utterly melted from all the residual heat, but alas, the only thing coming to a simmer is April’s suspicions after Karen thinks she sees him out and about when he’s supposed to be off to Vermont for the week. She goes to his apartment and finds it unlocked — to clarify, this apartment is in L.A., not on the outskirts of Montpelier — but instead of calling 9-1-1, April sneaks in, sees a pic of herself and Daniel smooching, and sneaks back out feeling all “giddy emoji.” Little does she know, her next call from Daniel isn’t originating from his late mother’s home, but from a truck with some redheaded skank bearing coffee for two.

Key questions: How come April didn’t demand to do FaceTime under the guise of wanting to see Daniel’s renovations on his mother’s house? And is it possible Daniel and redhead are private investigators on a stakeout rather than pickup truck lovers?

JOSS | Joss and Harry wind up catering a party for Justin Hartley’s Scott — after which, Joss agrees to a dinner date with the adorable plastic surgeon. After she fills him in on her relationship with Alex, he sees the soft, loveable gal beneath the snarky exterior, but their first roll in the hay proves about as sexy as a labradoodle making wee-wee in the kitchen. Joss is ready to toss the limp noodle out with the pasta water — ’til Scott reveals he wasn’t fully committing to the encounter. Turns out, the guy has a shoe fetish — and a walk-in closet filled with ladies’ designer footwear to prove it. But does he have the correct glass slipper for our party-planning Cinderella? To paraphrase Beyoncé, “If ya like it then you shoulda put a shoe on it.”

Key questions: Was it too early for Scott to be revealing his shoe fantasies? And did anyone else notice Harry’s discomfort at the site of Joss and Scott’s smooch?

Your turn. What did you think of the “Playing With Fire”? Are you #TeamSavi or #TeamJoss in the sisterly disagreement? What’s Daniel’s damage? Hit the comments with your thoughts!