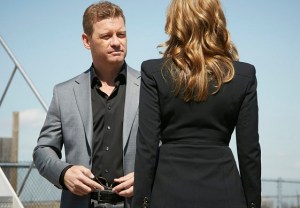 There’s a new man in Annie Walker’s life on Covert Affairs, but is private contractor Ryan McQuaid interested in her brains or her heart?

“He’s very intrigued by her” as an operative and a woman, actor Nic Bishop tells TVLine. So what’s a private spy to do when someone catches his eye, professionally and romantically? “He’s going to try and acquire as much information about someone like her as quickly as he possibly can.”

RELATED Covert Affairs Scoop: [Spoiler] Returns! But Why? And for How Long?

Although Annie didn’t seem to return the interest in the season opener, Bishop insists that McQuaid is “really good” for the CIA agent and hopes to win over the Annie/Auggie ‘shippers.

Meanwhile, this Tuesday’s episode (USA Network, 10/9c) will find the two working together for a common cause. But this is a show about covert ops, so the new guy is holding onto some secrets, Bishop tells TVLine below.

TVLINE | In the season premiere, we see that Ryan has designs on Annie. How do you think the Auggie/Annie fans are feeling about your character?
[Laughs] I think I’ve got a bit of an uphill climb in front of me. Auggie is a much loved character. I can absolutely see why. Chris [Gorham] is great in that role, and he’s been a fan favorite for a long time. With any show that’s been going for a while, they need to reinvent the energy and keep thinking of ways to challenge the characters and challenge the audience. So that’s what this is going to do. The introduction of my character is certainly going to challenge the audience. I just hope they get onboard because McQuaid is a great character. He’s a character with a lot of integrity, and he’s really good for her in a lot of ways.

TVLINE | What does he see in Annie that he likes?
He sees a lot of himself. He sees a lot of the kind of person he tries to function as, someone who is very committed to the greater goal, which is catching the bad guys, basically. He sees that she’ll stop at nothing to get there and she’s very driven and focused. She is very morally sound. He sees that she’s a really good woman and she’s doing all this for the right reasons. Even though he’s a billionaire [and] he’s got all these expensive toys, that all came from him doing what she does.

TVLINE | She doesn’t seem that interested in him in the premiere. How is that relationship going to evolve?
There’s some pushing and shoving with regards to that for a while. He’s quite forward, and he has a twinkle in his eye. He likes to push people’s buttons. That’s just the way that he operates and the way that he’s always operated. She’s a bit alarmed or cautious of that immediately. But we’ll just have to see. TVLINE | What can we expect in this Tuesday’s episode?
We end up together, pursuing a terrorist who is hiding out in Venezuela. So we have all kinds of crazy adventures, trying to work together and reach that common goal, but with different ways of going about it. That’s a really interesting journey for the both of us, and it’s the start of our working relationship.

TVLINE | If he works with the CIA as a private contractor, does that mean, at some point, we might see Ryan and Auggie interact?
I thought about that, and it’s a really interesting point. In the first couple of episodes, they have nothing to do with each other. I don’t know. I think at some point we will. But up until now, that certainly hasn’t been the case.

TVLINE | In this world, there tends to be a lot of secrets. Should we expect McQuaid to be unleashing some of his own?
Yeah. Anyone who works in this kind of field, absolutely, they have many secrets. He doesn’t work for the CIA. He’s a private contractor, so therefore, he’s got a whole bunch of other cases and contracts that he can’t talk about to anybody else in the show, including Annie. So he has to keep some of those things very close to his chest because the consequences of him letting that information out are either he’ll lose these multi, multimillion dollar contracts or he could potentially go to prison.

Covert Affairs fans, how are you feeling about Ryan McQuaid? Drop a comment with your thoughts below.