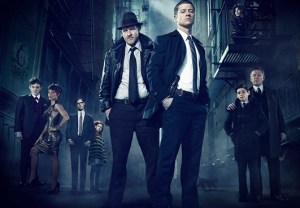 Members of the Justice League — specifically Bruce Wayne, Barry Allen and Oliver Queen –will come together under one roof at San Diego Comic-Con 2014.

The event, taking place on Saturday, July 26, will also feature a viewing of The CW’s The Flash pilot, as well as exclusive sneak peeks at NBC’s new drama Constantine and Season 3 of The CW’s Arrow.

Cast members and producers from all four shows will be in attendance.