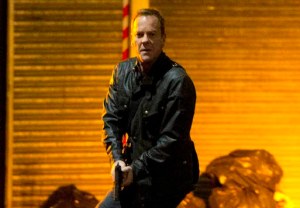 This week on Fox’s 24: Live Another Day, The Override Device (aka the biggest MacGuffin since The Letters of Transit) traded hands not once but twice, both Kate and Chloe learned shocking truths and an infamous figure from Jack Bauer’s past resurfaced.

I see what you did there, 24. Toward the close of another roller-coaster, edge-of-our-seats hour — the 10th of this season’s 12, welp — and on the heels of a seemingly random and misplaced convo between Audrey and Mark about her and Jack’s past, a key player in the events that broke up the old lovers resurfaced: Cheng Zhi, the former Chinese consulate security boss who back in the day tortured Audrey, leading to her crippling bout of catatonia.

Cheng’s return makes for a nifty “full circle” aspect to LAD‘s story, while also seeming organic enough. Maybe if Jack can ultimately put one between the guy’s eyes, all will truly be forgiven for him and Audrey?

Earlier in this week’s hour….

Navarro handed off the override device to his mysterious master, only to have Adrian double-cross (or, double-Cross) him and skimp on his getaway vehicle. That made Navarro ripe for the picking by the CIA, who then brought him back to the station, where Kate learned the whole sordid truth about her boss’ role in framing her husband for selling secrets, which ultimately led Adam to take his life. Jack took control of Navarro’s interrogation (to Ritter: “I wasn’t asking”), only to get at best an offer to trade intel for immunity. But later, in the infirmary, Jack and Kate put on quite a show, leading Navarro — with “crazed” Kate’s gun pressed against his temple — to cough up the device’s tracker code.

Alas, just as Jack and Kate were leading a charge to Cross’ hideaway (where Cheng had shown up to seize the device and then kill Adrian), their car was broadsided by a truck driven by Russians angling to fulfill the forged rendition order themselves. As the episode closed, Jack and Kate were trading gunfire with the Russians, while back at Cross’ hideaway Cheng used the device to dupe a U.S. naval ship into torpedoing a Chinese carrier — as a horrified Chloe, already rattled by Adrian’s reveal that her husband and son had died in a simple accident, could only look on.

What did you think of 24: LAD‘s antepenultimate episode? Any new theories on how they’ll cover 14 hours over these final two? (We’re totally ending with a “12 Hours Later…/Jack on a beach with umbrella drink” epilogue, aren’t we?)