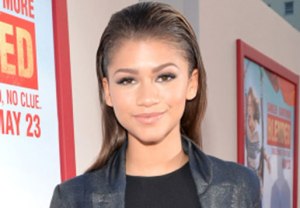 When it comes to portraying Aaliyah, it turns out Zendaya is not that somebody.

The cabler confirmed the news via Twitter on Sunday, stating, “We are sad Zendaya will no longer portray Aaliyah. Production is currently on hold.”

Although the exact reasons behind Zendaya’s departure remain unclear, E! News reports that production has experienced problems obtaining the rights to Aaliyah’s songs, four of which were to be recorded for the TV movie.