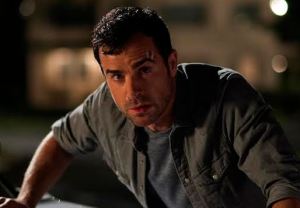 In the harrowing first moments of The Leftovers, a young mother straps her baby into his car seat, turns around, and that’s it — he’s gone. Vanished. Disappeared along with 2 percent of the world’s population. Where did everybody go? And why? When we pick up the action three years after that fateful October 14, those mysteries remain unsolved. But at least this recap of the breathtakingly bleak HBO series’ debut may be able to answer a few questions for you…

DARKNESS FALLS | Early on, we meet Kevin Garvey (Justin Theroux), the sheriff of suburban Mapleton, New York. He’s trying to keep both the town and what’s left of his family together, but under the circumstances, these are the most formidable of tasks. On one hand, he gets no support from Mayor Warburton, who insists on holding a “healing” Heroes Day tribute to the goners in spite of the threat of a visit from the creepy-as-sin, chain-smoking, silent, white-wearing, adjective-inspiring Guilty Remnant cult. (Worst idea since Mayor Vaughn refused to close the beaches in Jaws.) And on the other hand, son Tom has joined an entirely different cult, this one fronted by a worrisome character called Holy Wayne (and less into white clothes and Virginia Slims), and daughter Jill has not only begun expressing herself violently, she’s attending sex-and-drug parties with BFF Aimee (who boinks the one boy Jill actually likes during a game of Spin the Cell Phone!). And these, we soon learn, aren’t even the biggest of Garvey’s troubles!

STALK FOOTAGE | Elsewhere, when members of the Guilty Remnant gather for the equivalent of a staff meeting, they puff on their cigarettes and pass around manila envelopes full of intel on people that — for reasons we’re not told — they are targeting. One such victim is Meg (Liv Tyler). She’s understandably unnerved when the ghostly figures of Laurie (Amy Brenneman) and one of her cronies show up outside her house, at the restaurant where she’s dining with her fiancé, pretty much everywhere. She even loses it at one point and slaps Laurie. Then something totally bizarre happens: Meg takes a cab to the Guilty Remnant cul de sac and asks if she can stay. (WTF?!) Of course you can, says leader lady Patti — aloud, adding that this will be the last time she and Meg speak. (Granted, Meg’s fiancé seems like a tool. But to join these nutjobs?)

BEGGARS AND CHOOSERS | After the Guilty Remnant employs a Westboro Baptist Church tactic — raising signs reading “Stop Wasting Your Breath!” — to incite a riot at the Heroes Day event, Garvey gets drunk and shows up at the cult’s compound demanding to see his wife… who, it turns out, is Laurie. She’s as gone as any of the people who went missing on October 14, only — and maybe this is worse? — he knows exactly where she is and just can’t get her to come home. (Maybe it has something to do with the flash we see of him having sex on the day of “The Sudden Departure”? Maybe it wasn’t his missus with whom he was having sex?) When she refuses, as she apparently always does, Garvey drives off and spots the deer that he glimpsed earlier in the episode (and suspects of trashing his house the night before… it’s that kinda weird.) This doesn’t go well. As bad as we feel for Garvey when we first meet him — when the dog to whom he’s saying hello in the street is shot dead in front of him by a gun-toting crackpot — we feel worse for him when he sees a pack of canines gruesomely attack the deer and tearfully joins the crackpot in shooting them down. This is some soul-crushing s— right here.

OK, your turn. What did you think of the premiere? Were you intrigued? Depressed? Scared? Impressed? Hit the comments!