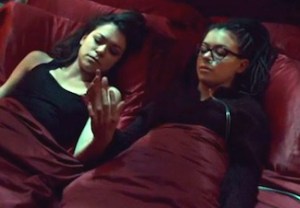 We’ve got questions, and you’ve (maybe) got answers! With another week of TV gone by, we’re lobbing queries left and right about shows including Orphan Black, True Blood, Penny Dreadful and Big Brother!

1 | Watching scenes like Orphan Black‘s clone dance party, Cosima/Sarah’s bed chat and even Rachel taunting Sarah through the mirror, does it baffle you that the show doesn’t get more credit/recognition for its directing?

VIDEO Orphan Black Bosses Reveal How They Made the Clones Dance!

2 | Can we talk (again) about how during the Crisis finale’s final showdown, it went from dark of night to sunshiney morning in the time it took Gibson to walk into the cabin and hear his daughter read a few lines from his manifesto? And how much do you hope that the EMTs delivered Gillian Anderson to the Hannibal set?

3 | Why did the all-knowing demon possessing Penny Dreadful’s Vanessa taunt Ethan with his and Dorian’s one-night stand rather than, say, the fact that (unless the show is misleading us) he’s Jack the Ripper?

4 | Falling Skies‘ “masked motorcyclist” Tom: Ugh? And where does the line form to smack wishy-washy Cochise? 5 | Did True Blood‘s Tara deserve better than an off-screen death? (Speaking of which: Yes, Pam has other things on her mind, but shouldn’t she have sensed that her progeny bit the big one?)

6 | Given the utter lameness of Rising Star‘s contestants and overall execution, wouldn’t ABC have been better off sticking with Duets?

7 | How badly do you need one of Randy’s hugs now that Enlisted is officially over?

8 | How did Devious Maids‘ Nick figure out so quickly that Marisol was trying to drug him? 10 | We’ve said all we care to about the Daytime Emmys pre-show’s “social media experts”… but how about the producers who let several actors get interviewed by both teams? It was like, “Your root canal is done! Now go have some peanut brittle.”

11 | Why did The Talk‘s cohosts wear the same dresses for their day-after Daytime Emmys show as they did for the actual ceremony? Did they have them dry-cleaned inbetween? 13 | Is it A) the fact that Mistresses‘ Dom is now Savi’s boss, B) the fact that their relationship is no longer illicit, or C) the fact that Savi has yet to fully deal with the loss of her baby, that’s sapped most of the sexual chemistry from their coupling? And speaking of, um, couplings… a quick “yes or no” poll: Will Karen wind up getting paid for her extracurricular “work” before the season is over?

14 | Would you have liked to be sitting next to 24‘s Chloe in that noisy pub as she worked her laptop to stop a massive terrorist attack on London? Also: Why was there no mention of the hit man’s cell phone (and its incoming call from Navarro) that had conspicuously been shown lying next to Jordan Reed’s bleeding body?

15 | Did it seem like Switched at Birth‘s Bay and Emmett accessed Matthew’s computer files way too easily? (Hello, no passwords?!) And did neither of them have a class they needed to be in at that time?

16 | What possible reason could So You Think You Can Dance have had for not showing us any supporting evidence for the decision to cut the seemingly flawless Armen Way, Johnny Waacks and Justine Lutz? 17 | Whoa, stop the presses — did Suits‘ Donna have a fashion miss this week?! And is this takeover battle exposing a real ugly side of Mike?

18 | Would Mystery Girls become a watchable show if they just got rid of the overacting performers?

19 | Did Taxi Brooklyn at first have you calling shenanigans on Ally Walker playing mom to Chyler Leigh? (Even though it jibes, given the actresses’ ages?)

20 | When Big Brother’s Cody said goodbye to his family, was anyone else reminded of Saturday Night Live‘s “Kissing Family” sketch?

21 | There’s no such thing as a dull Defiance bath scene, is there? (Stahma is shameless!) And which reunion made you beam most: Nolan/Amanda or Irisa/ Tommy? Lastly, who will be the one to ultimately get the stick out of Berlin’s butt?

22 | Undateable is unarguably a surprise summer treat, but can Ron Funches (who plays Shelly) maybe find a second way to deliver his lines? Also: TV’s Ed now playing dad to a sitcom’s 30something lead makes us feel old, right?

23 | Is Last Comic Standing surprising you with how genial, helpful and rarely caustic Roseanne is as a judge? But yikes, could the sketch challenge been less funny?