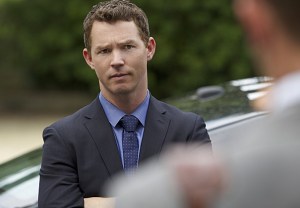 Shawn Hatosy is donning a badge again, this time in CBS’ sexy new legal drama Reckless (premiering Sunday at 9/8c). But the police sex scandal his Detective Terry McCandless stirs up stands in stark contrast to his days patrolling the streets of Los Angeles on Southland.

Read on as Hatosy previews his character’s “dysfunctional” romance, sheds light on the villainous research he did for the role and more. Plus: The actor also weighs in on Southland’s abrupt demise.

SOMETHING FOR EVERYONE | “It’s a serialized legal procedural,” describes Hatosy. “It’s an intensely character-driven show. It will satisfy those who are interested in a case-of-the-week narrative, but the genetic make-up of our show is the complex romantic relationships which occur in and out of the courtroom.” Speaking of hook-ups…

HOT & HUMID | The Charleston, South Carolina-set series is steamy – and we’re not just talking about the muggy weather. From the risqué opening scene, it’s clear that Reckless isn’t your typical CBS fare. “That was the goal here,” reveals Hatosy. “I know [executive producers] Ian [Sander] and Dana [Stevens] were intent on producing a project that would have been successful on cable. They wanted to push the envelope as far as they could, and CBS responded.” MESSED UP LOVE | Among those taking part in the sexy shenanigans are Hatosy’s Terry and Haig’s Lee Anne, who have a “very dysfunctional union” that will make you see the sweet Fringe actress in a whole new light. “That relationship occurs any place they decide they want to” get frisky, previews Hatosy. And although the two find themselves going from hot and heavy to hot and bothered by the end of the premiere, “we’re just getting started,” teases the actor. “It seems like it might be adversarial, but it’s far from that. They’re in and out of the bedroom throughout [the season]. She holds most of the power. He will literally do anything she asks.” And sometimes, he’ll just do things that are “batsh–t crazy” to prove his love.

BAD GUYS | Hatosy has plenty of experience protecting and serving on screen, but playing the corrupt Terry, who is “so far from [Southland‘s] Sammy,” still required research. “The challenge there becomes how to give him some dimension [and] not let it be a one-note character,” explains Hatosy, who looked to some of film and TV’s most iconic baddies for inspiration. “What I discovered was at the core of every villainous character is an individual who began behaving nefariously because love did him wrong. You’ve got Darth Vader. Here’s an evil villain. Did he start out that way? No. He became a jerk because Natalie Portman broke his heart. Wile E. Coyote – here’s a coyote with nothing but good intentions until The Road Runner comes along, and then he becomes addicted to the chase, which made him impossible to be around. … Terry’s no different. Once he drinks the Lee Anne Kool-Aid, there’s no coming back.”

ON THE BEAT | Looking back at Southland‘s critically acclaimed run, Hatosy is “proud” of what the show was able to accomplish. “It was a life-changing project,” he adds. As for the de facto series finale, the actor believes the cop drama “certainly went out with a bang,” adding that the last season “was one of our best as a whole for all the characters… So it’s tough to go out on a high note when you feel like you’re just getting going. But having said that, it really was one of our best seasons, and to end with that many questions [leaves] people wanting more.” And Southland diehards do have plenty of questions, like what might have the future have held for Sammy and his partner Ben, who were last seen having a very heated confrontation? “They’re not going to be able to exist as partners,” he speculates, “or [even] in the same department.”