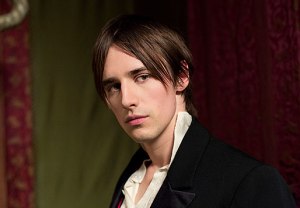 It’s not easy being Gray.

As the freshman season of Penny Dreadful comes to a close this Sunday (Showtime 10/9c), Dorian will once again cross paths with Vanessa Ives — and this time, he’s looking for answers.

TVLine spoke with Reeve Carney — who plays the man with the hidden portrait — about romance, bromance and working with director James Hawes (Doctor Who, Enid).

TVLINE | Are you excited for the finale?
I’m excited, but also sad because there isn’t another episode to look forward to this season. Now I’m going to have to re-watch everything. They leave you wanting more — which is a good thing.

TVLINE | What Dorian will be up to in the finale?
You get to see a different side of Dorian from what you’ve been seeing for the rest of this season. I haven’t seen the final edit and how it plays out, but I was very excited to have the opportunity to try something that affected him.

TVLINE | Dorian’s going to be meeting Vanessa again. How does he feel about her running off like that after they slept together?
It’s complete shock and confusion, not quite being fully aware of what it is that’s causing her to react in that particular way. That’s how it begins and I think that’s all it is. There’s not a sense of true understanding of what has just transpired at that point. … It’s the first time in a very long time that Dorian’s experienced any form of rejection.

TVLINE | Dorian and Vanessa are really drawn to each other, almost supernaturally so. Could he be actually falling for her?
It feels like that to me. I think that he’s drawn to her in a way that he’s not drawn to anyone else. Even from the first meeting, there was something there, something unique.

TVLINE | How do you feel about their relationship?
I would say that they’re disenfranchised from the world around them, more so than even any of the other characters. There’s something about those two particular characters; there’s a sense of liberation and freedom that they tend to walk in that I think unites them in a way.

TVLINE | There seemed to be a connection between Ethan and Dorian as well. What do you think about their relationship?
In Ethan, Dorian sees someone who’s similarly fearless and pretty much game for anything. I don’t think either of them expected that night in Episode 4 would have ended the way that it did. I don’t think that was the intention really. It’s a different kind of energy that Dorian has with Vanessa. It feels more like brotherhood.

TVLINE | James Hawes directed the last two episodes. What was it like working with him?
He’s fantastic. One thing that I particularly enjoyed with Jim was that he would take us aside once for maybe four or five hours and go over each episode and every scene in every episode and the scripts — what our intentions and what our relationships between the characters would be. By the time we got onto the set, we were on the same page so it was clear as to whether or not we were diverting from the original game plan, which I found to be quite helpful.

Are you excited for the season finale of Penny Dreadful? Hit the comments with your thoughts.