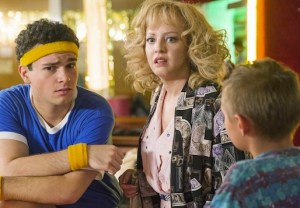 The Goldbergs is cooking up some kind of wonderful John Hughes tribute.

Series creator Adam F. Goldberg tells TVLine that a Season 2 episode will feature an homage to one of the late filmmaker’s classic ’80s flicks.

“We are writing it now,” he confirms. “I’m not going to reveal [which film] it is yet. But it’s going to be very difficult to shoot and very expensive. So it’ll be a real nightmare, but hopefully, it’ll turn out great.”

The special outing will likely air midway through the season “when we’re starting to run out of steam,” Goldberg adds with a laugh. “We’ll hopefully gain some steam with our John Hughes episode.”

For her part, the show’s leading lady Wendi McLendon-Covey swears she hasn’t been told which Hughes pic will get the Goldbergs treatment. But if she had to guess… ? “I love Sixteen Candles,” she shares. “But it seems like The Breakfast Club might be a better fit.” (With reporting by Vlada Gelman)