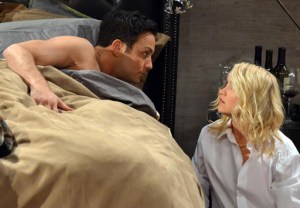 In the real world, sleeping with your prospective boss on the same night he plans to propose to his girlfriend would be a terrible idea. But in TV world, that kind of drunken misstep might just secure the job of your dreams.

That’s essentially the gist of ABC Family’s new comedy Young & Hungry, which premiered Wednesday. Hannah Montana‘s Emily Osment plays Gabi Diamond, a down-on-her-luck food blogger with no job, no money and no clue. So when an opportunity to work as a private chef for tech millionaire Josh Kaminski ($#*! My Dad Says‘ Jonathan Sadowski) arises, she dives right in…to his bed.

You see, Josh initially tries to propose to his socialite girlfriend, but when she tells him the relationship is moving too fast, he starts commiserating (and more) with Gabi, who cooks the proposal dinner as part of her job application. And because it would apparently be illegal to fire an employee after sleeping with them — Josh’s apartment really needs an HR department — Gabi keeps the job and all is well.

Gabi’s biggest obstacle — aside from her apparent lack of boundaries — comes in the form of Josh’s personal assistant/publicist Elliot (Entourage‘s Rex Lee). Like a sassy guard dog in a bow-tie, Elliot is determined to undermine our young heroine at every turn, mostly because he’s bitter that Josh didn’t hire “hot” celebrity chef Michael Voltaggio. I’m hoping Elliot’s ‘tude will pass over time because, honestly, his disdain for Gabi doesn’t come off quite as funny as it probably should. In fact, it kind of takes a toll on the show’s overall tone.

Fortunately, for every Elliot, there’s a Yolanda (Let’s Stay Together‘s Kym Whitley), who serves as Gabi’s kitchen-side guardian angel. Actually, that might be a bit of a stretch; she doesn’t actually do anything to help Gabi in her pursuits, but at least she’s always there to lend a high-five when needed.

So, readers, do you plan on getting “Closer” to Young & Hungry? Or are you ready to join the jumpers on the Golden Gate Bridge? Rate the premiere below, then drop a comment with your full review.