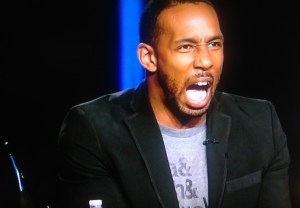 No, no, no. NOOOO! We haven’t even reached the live shows of So You Think You Can Dance‘s eleventh season and already I’m sobbing like the world’s biggest onion is getting diced in my living room?

Yep, my eyes got misty as Ricky Ubeda delivered such an emotionally devastating solo that Nigel Lythgoe and Mary Murphy might as well have given him a “Go Directly to the Top 4” card (without passing “Go” or collecting $200). I shook a fist at the heavens after the absolutely fabulous Johnny Waacks (along with ballroom stud Armen Way and crazy-beautiful Justine Lutz) got booted without explanation. I may have even sobbed a little as besties Rudy Abreu and Nick Garcia got triumphantly reunited — both of ’em having made the Top 20 on a show that loves to rip apart siblings, couples and pals. #guyshugging

Either I’m getting sappier with age — or this year’s Top 20 contestants are a moving bunch of movers and shakers.

My only real complaint about tonight’s two-hour telecast is the fact that Fox’s shortened Season 11 episode order condensed callbacks and Top 20 announcement into one show — [insert rageful emoji here] — robbing us of the joy of seeing the kids strut their stuff in their own styles (to eye-popping impact) in duos, trios and groups prior to the voting rounds.

Before I jump into a series of rants, raves and ridiculatas, here are the names of the Season 11 finalists (in announcement order):

And now, for a few thoughts on the show — which, again, tried to fit 10 lbs of television into a 5 lb sack.

* By unabashedly telling an emotionally uninvested dancer that she’d performed with “deadness” in her face, Tara Lipinski moved up to No. 1 in my ranking of Must-Have Season 11 Guest Judges.

* Tanisha Belnap’s solo to Britney Spears’ “Work Bitch” was all sizzle, no bacon — unless you like your bacon fried in clichés and obviousness (right down to the tiny pink skirt).

* Is there anything more delicious than Twitch’s joyous, full-bodied responses to great performances? Maybe Nigel should think about having him join the judges’ panel full-time — but only offer feedback with facial expressions and gestures. Yea or nay?

* I hate to kick a gal when she’s down, but I always kinda thought Marie Poppins was overrated.

* Let’s update “Don’t judge a book by its cover” to “Don’t assume a guy is hip-hop ’cause he’s black.” And yes, I speak of Marcquet’s partner’s “whoopsie!” of an assumption.

* Marlene is an absolutely intoxicating vision — except for when her limbs turn into limp spaghetti noodles in hip-hop routines. Girlfriend had better have worked on her precision and articulation between callbacks and live shows.

* Has a contestant ever gone from transfixing to tragique than Steven Kador’s journey from animation solo to total jazz immolation?

* Awww, Jaja! Do come back next season — and yes, I am just going to forge ahead in my belief that there will be a next season.

* I’m not sure I’m sold on this year’s tappers. Not a dis — I just need to see more footage is all.

* LOL at Adam Shankman declaring that one group performance to be below Dance Moms standards. (He wasn’t lying, either!)

* I would’ve preferred less of One Love’s weeping “which one of us should go home?” debate and more actual dancing. I’m not alone, am I?

* Does Ricky Ubeda have any bones in his body, or just an unnatural amount of cartilage? (Oh, and for the record, Nigel, I think he looks better clean-shaven.)

* Snap poll: If Johnny Waacks hadn’t danced in a skirt for his final solo, would Nigel have advanced him to the Top 20?

* I’m stoked at the depth of Season 11 ballroom specialists — and, if you’ll forgive a moment of brutal honesty — kind of happy that not-quite-mature-enough Landon Anderson isn’t one of ’em.

And finally — with the full acknowledgement that many members of the Top 20 have not yet received enough screentime to make a scientifically sound assessment — here are my picks for the early Season 11 front-runners:

Your turn. What do you think of the SYTYCD Season 11 Top 20? Which elimination hit you the hardest? Who are your early faves? Who doesn’t belong? Sound off in the comments, and for all my reality TV recaps, exclusives, news and interviews, follow me on Twitter @MichaelSlezakTV!