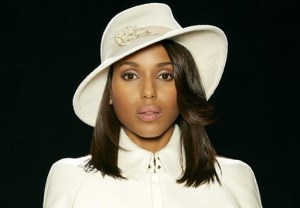 RELATED Eye on Emmy: Bellamy Young on the Scandal Twist That Made Mellie a Survivor (and the One That ‘Killed’ Her)

Scandal has teamed up with The Limited to produce a line of clothing inspired by Olivia Pope’s signature style on the ABC drama, The line — which hits shelves on Sept. 22 — includes tops, pants jackets and outerwear beginning at $49.

“People who love the look of the show can now step into this world in a way that is affordable and accessible because not everybody can afford to have the clothes they see on the show,” Kerry Washington tells Women’s Wear Daily.

* John Wirth, the executive producer of AMC’s Hell on Wheels, explains the recasting of Cullen’s bride Naomi to EW.com. Formerly played by Siobhan Williams, the role will belong to MacKenzie Porter (R.L. Stine’s The Haunting Hour) when Season 4 begins Aug. 2.

* MTV is (sort of) bringing back TRL with a little help from Ariana Grande. The “Problem” singer will perform her next single during a half-hour special, Total Ariana Live, airing July 2 at 7/6c.