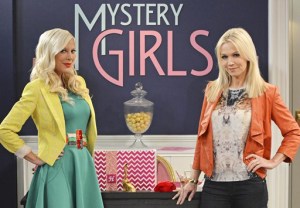 Former Beverly Hills, 90210 stars Jennie Garth and Tori Spelling play two washed-up ’90s TV actresses, best remembered for their roles on a cheesy action show called Mystery Girls. But while Garth’s Charlie has acclimated to life out of the spotlight — she’s literally living in Borington with a hunky husband and a teenage daughter — Spelling’s Holly is desperately clinging to what remains of her fame.

The two are reluctantly reunited when a Mystery Girls superfan (Law & Order: SVU‘s Miguel Pinzon) witnesses a real-life crime and refuses to give his statement to anyone other than the stars of his favorite show. This minor taste of the action is enough to thrust Charlie and Holly back into the crime-solving game — but for real, this time.

On Wednesday’s outing, originally intended as the series’ third episode, rumors of Holly’s untimely demise inspire the Girls to stage a fake funeral in order to catch a man peddling a supposed sex tape of the “deceased.” What could possibly go wrong? (Everything, obviously.)

Ultimately, the Girls discover that it’s not even Holly on the tape at all, but rather her uptight co-star! Needless to say, that’s all the ladies at the next Borington High School PTA meeting will be talking about.

Obviously, this show is ridiculous, but everyone — including Garth and Spelling — is aware of that, which is what makes Mystery Girls work. Though a few background characters feel superfluous, nearly everything about ABC Family’s new comedy screams “guilty pleasure.”

So the question is: Will you remain hot on the Mystery Girls‘ trail, or is are you already to close this case for good? Cast your vote below, then drop a comment with your review of the premiere.