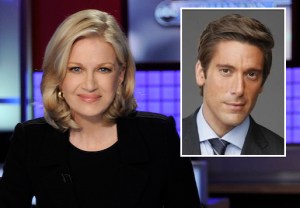 Diane Sawyer will step down as anchor of ABC World News this fall, after nearly five years in the position.

David Muir, who has been the anchor of World News‘ weekend edition since February 2011, will take over as anchor and managing editor of the weeknight program effective Sept. 2.

Sawyer — who succeeded Charles Gibson as World News anchor in December 2009 — will stay on at ABC, focusing on major interviews, reporting and primetime specials (picking up some of the slack from “retired” Barbara Walters), MediaBistro reports, while Muir will continue to co-anchor 20/20 with Elizabeth Vargas.

Muir’s replacement for the World News weekend editions will be named at a later date. Let’s hope they don’t put out a “casting call” for “social media experts.”

Concurrent with the World News changeover news, it was announced that Good Morning America co-host/This Week anchor George Stephanopoulos has extended his pact with ABC News and in doing so added the title of chief anchor, making him the lead in special reports and election coverage.