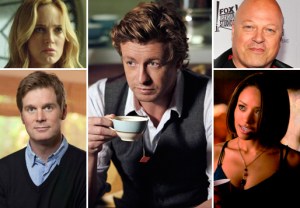 Question: Anything on American Horror Story: Freak Show? —Sam
Ausiello: Franchise virgin Michael Chiklis will be playing “a strong man who’s married to Angela Bassett[‘s character],” exec producer Ryan Murphy told us at Thursday’s Critics Choice Awards, where he was honored with the Louis XIII Genius Award. “He has scenes with Angela and Jessica Lange and [onscreen ex] Kathy Bates. I love the part because it’s really written to be quite vulnerable, which is something I think Michael does so well —  the strong man who’s vulnerable. I’m very excited to see [him] tussle with all those great ladies. And he’s really up for it, really excited about it.”

Question: You reported in December that Luke Grimes left True Blood ahead of Season 7 due to the “creative direction” of the character James. It seems based on Sunday’s premiere that James, now played by Nathan Parsons, will be a love interest for Lafayette. Was Luke uncomfortable with the same-sex paring? —Nate
Ausiello: Grimes’ rep insists James’ Season 7 storyline “was never actually fleshed out in advance of him fielding a few film roles which conflicted,” adding that the Brothers & Sisters vet (and upcoming Fifty Shades of Grey co-star) “ultimately exercised his out clause to pursue these other projects as opposed to anything having to do with [his True Blood] storyline.” HBO, meanwhile, is standing by its original statement that, “The role of James [was] recast due to the creative direction of the character.”

Question: My favorite show is The Mentalist. Do you have any news for Season 7? –Snežana
Ausiello: A new woman is about to enter Patrick Jane’s (professional) life. The CBS drama is casting the series regular role of Michelle Vega, a rookie FBI agent who is a student of combat and weaponry and is unfazed by high-pressure situations (such as when the show awaited that 11th-hour renewal).

Question: Any news on whether Caity Lotz will return to Arrow in Season 3? —Mena
Ausiello: As Colton Haynes (who plays Roy) reminds, Sara “gave up her jacket” to sis Laurel before rejoining Nyssa and the League of Assassins in the season finale. But hey, that’s nothing a trip to Wilson Leather Goods can’t fix, right? “I think we’ll definitely see Sara back,” Haynes ventures. “I’m not sure how soon, but obviously, when she does, we might see different facets of her.”

Question: Any scoop on Nashville‘s upcoming season? —Martha
Ausiello: Instead of scoop, I’ve got Hayden Panettiere’s Season 3 wish list — which you will accept and enjoy! “I’d be lying if I said I didn’t miss [shooting scenes with] Chip [Esten],” the actress confesses. “We were together so much the first year, and when you get to know somebody that well as an actor, it allows you to really delve into things in a way that is very free and real and raw. In Season 2, I didn’t get to see him all that much.” Panettiere says she still marvels that Nashville‘s audience embraced the Juliette-Deacon relationship as it transitioned from romantic to platonic. “This is a man who Juliette had sexual relations with, who is now more of a father figure, and it’s not weird, it’s not uncomfortable,” she notes. “You didn’t lose any respect for either one of them for doing it — which is really wild.” On the ickier side of Juliette’s relationship spectrum, Panettiere is pretty sure there’ll be more fallout from her character’s one-night stand with lecherous record exec Jeff Fordham. “That was a pretty big mistake for Juliette to make with a pretty dangerously disliked character,” she reasons. “I would be surprised if [the writers] just let that go or resolved it very quickly.”

Question: Every season of Covert Affairs, Auggie has found himself in handcuffs at least once. Any hints as to what kind of trouble he’ll get into this season? —Rhiannon
Ausiello: Female trouble — sans handcuffs (I think). In next Tuesday’s episode, Felicity‘s Amy Jo Johnson makes her debut as Hayley, an investigator with the National Counter-Terrorism Center who takes a shine to Auggie. But first and foremost, “Hayley comes into the show in a spy story-related capacity,” previews executive producer Chris Ord. “So [that] will collide and make their relationship something more than just romantic.”

Question: Got any Vampire Diaries scoop? —Lakshana
Ausiello: Do I ever, Lakshana. I know fans have been concerned about Kat Graham not returning to the show next season, following Bonnie’s trip into oblivion with Damon, but the series vet assures us we have nothing to worry about. “She is [back next season], but I don’t know in what form or for how long,” Graham teases, adding that she was “just as shocked as the next person” when she first heard about the ending. “I’ve been on the show for five years, and I cried when I watched the finale.” relationship be like with her dad? —Deb
Ausiello: Well, Deb, if you guessed either “awkward” or “difficult,” you’d be right on the money. “Peter is the guy who Malia has heard nothing but horrible things about from Scott, Stiles and Lydia,” Shelley Hennig explains. “I’m sure there’s a part of her that thinks, ‘This is my dad, I can’t ignore him,’ but then there’s also another part, telling her, ‘I don’t think that’s a good idea.’ There might be a bit of a struggle with that.” I say “might” is an understatement.

Question: Any scoops on Falling Skies Season 4? –Ganon
Ausiello: This Sunday, Tom takes a very important meeting, Dr. Kadar resurfaces (whether Lourdes likes it or not!), the nature of the “black hornet” ET is revealed and a pair of someones will share a first kiss.

Question: I love your site. I visit it all the time. My question concerns Andy McNally and Sam Swarek from Rookie Blue —are they ever going to find their way back together? —Sarah
Ausiello: Series Creator Tassie Cameron assures us that the twosome is “not keeping their distance from each other. They’re just taking it slow.” Meanwhile, Nick will have a “a bit” of a hard time seeing his ex with Sam in this Thursday’s episode. “But they’re all professionals and Nick is a very, very stand-up guy,” says Cameron. “He’s a pro, and he’s not going to let it wreck his professionalism.”

Question: Any scoop you can give us on Season 5 of Rizzoli & Isles would be brilliant — like, will Chris Vance be back at any point as Casey? –Michelle
Ausiello: “It’s all about scheduling,” Vance aka Rizzoli’s baby daddy told us recently, just before heading off to Morocco, the Czech Republic and other far-off locales to resume filming Transporter: The Series (which bows on TNT this fall). “I’m shooting way across the world, but we’re trying to resolve it. There’s no reason there shouldn’t be [an encore].” Question: Please tell me we will see Patrick J. Adams on Orphan Black again? —Em
Ausiello: No word on Adams’ Jesse, but EP Graeme Manson is hoping to bring back another popular character — clone romancer Cal (played by Game of Thrones and Nashville thesp Michiel Huisman). The one (rather significant) obstacle? Notes Manson with a laugh: “[He’s] one busy actor.”

Question: Anything about The Fosters? —Karyn
Ausiello: Look for Callie to forge an “instant connection” with her surprise half-sister Sophia, previews the actress’ portrayer, Maia Mitchell, adding, “As an older sister, she absolutely wants to protect this girl — she can see that she is going through some tough stuff and maybe is a little lonely. She’s really trying to find a balance between staying true to her family and the Fosters, [and] also looking after this girl, who is obviously needing her right now. It’s a balancing act.”

Question: Is the bloodbath that was Hannibal‘s recent finale going to turn the NBC drama into an entirely different animal in Season 3? —Lenny
Ausiello: A different animal like the endangered Ortolan Buntings that Dr. Lecter drown in Armagnac and ate whole with Will? (Sorry, I just couldn’t resist revisiting that disturbing image.) In all seriousness, though, expect the show to journey to Europe next year, according to series star Hugh Dancy. “It’s definitely in the cards,” he teases. “I mean, obviously Hannibal’s taken off, and Will is going to be in some way on his trail. So, I do think we’ll be on the road a bit.” Dancy also points out that because the show uses Thomas Harris’ books as its template, “It’s hardly a spoiler to say that Hannibal ends up incarcerated. It’s just a question of how we get there.”

Question: I’m dying to know anything about Season 6 of Parenthood. This is one of my favorite dramas! Anything we need to know? —Ben
Ausiello: I’m told all series regulars will be back for the 13-episode sixth and final season, something that was not a foregone conclusion. The reason the show’s renewal came down to the wire last month was because NBC, in an effort to trim costs, wanted to cut back the cast’s episode guarantee, triggering protracted, somewhat tense renegotiations. Ultimately, an “11 of 13” arrangement became the compromise. And if any member of the cast balked at those terms, they were free to walk. Luckily, none of them did. Question: Even though she was barely used, I was bummed to hear that Zoe Jarman was not returning to The Mindy Project full-time. What are the chances she will pop in as a guest star? —Joyce
Ausiello: The chances sound pretty good! “Zoe is one of those actresses that kills anything we give her,” raves exec producer Matt Warburton, who says her status change was primarily a “budgetary” issue. “We love [Betsy]. We love her in our world, and we want her here as much as possible.”