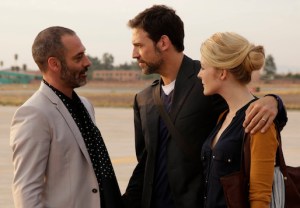 FX this Tuesday married Homeland to The Godfather and gave us Tyrant, a new drama created by Gideon Raff (Homeland) and exec-produced by Howard Gordon (24, Homeland). Will the strangers in a strained land saga score a spot on your DVR?

Tyrant stars British actor Adam Rayner (HawthoRNe) as Bassam “Barry” Al-Fayeed, the second son of Khaled Al-Fayeed, the dictator of a fictional Middle Eastern country. Haunted by, among other things, how his father regularly favored first son Jamal (Ashraf Barhom) during his childhood and his role in a man’s execution back when he was a kid, Barry has spent the past 20 years living in Los Angeles with his wife Molly (Jennifer Finnigan) and their Homeland-y teens Emma and Sammy.

The marriage of Jamal’s son prompts Barry to end his self-chosen exile and return to Abbudin, with his family in tow — though he is loath to entertain any of the flourishes (private jet, palace accommodations) offered up by his despot dad.

Once in Abbudin, Barry is quickly pulled into a bit of “family business” when a terrorist adversary threatens to bomb the wedding. While Jamal’s first instinct is to use brute force, Barry counters with a more pragmatic solution.

RELATED Summer Dates Set for FX’s The Bridge and The Strain, Plus Wilfred’s Final Bow on FXX

As the wedding revelry kicks into high gear (“Syria, Egypt? Firefights. Here, fireworks,” Tucker blathers), Khaled suffers a stroke. At the hospital, before he breathes his final breath, the dictator apologizes in private to Barry, saying he favored wrongly all those years ago: “It should have been you.” He also seems to ask Bassam to extend his visit, permanently: “Without you, they’ll kill us all.”

Barry has legit concerns about his father’s assumed successor — the depraved, Lamborghini-speeding, Aerosmith-cranking and frequently raping Jamal, he fears, is “broken”-slash-insane. And though Barry makes a concerted effort as the hour closes to get the hell outta Dodge, even striking Sammy when the lad refuses to budge, circumstances (including Jamal’s injury in a car wreck) conspire to keep him around. “I told you we shouldn’t have come,” he says to an at-her-wits-end Molly.

What did you think of Tyrant? Do you take issue with (as well-scrutinized by HitFix’s Dan Fienberg) the casting of a quite white man as Barry? And outside of Molly, how many lines combined did all of the other females have?