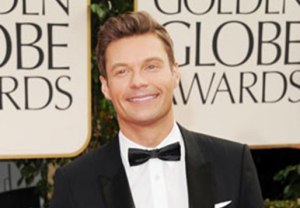 This…. is a big day for Ryan Seacrest.

The ubiquitous TV host has inked a deal to host and executive-produce a live Fashion Week special for CBS, according to The Hollywood Reporter.

With the addition of the Fashion Rocks telecast — Seacrest’s first on-air deal with CBS — he now has partnerships with all of the Big Four broadcast networks. (He just this week renewed his hosting gig at Fox’s American Idol, helps ABC ring in its New Year’s Rockin’ Eve and produces specials for NBC and its cable sibling E!)

Speaking of the latter, Seacrest extended his pact with NBCUniversal that will keep him manning the major awards show red carpets through 2015. A commitment to Today and NBC Sports is, however, no longer officially included in that deal.

Fashion Rocks will air as a two-hour primetime special during New York Fashion Week in September.