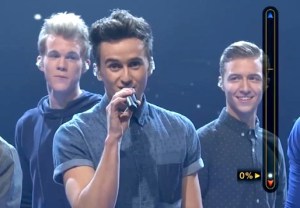 NBC’s shameless bit of Sunday night counterprogramming paid off, as a special edition of America’s Got Talent handily won the night in both total viewers (with 8 million) and in the demo (scoring a 2.1 rating) — though the competition series was down 30 and 19 percent from its most recent Tuesday outing.

Going head-to-head with AGT, the premiere of ABC’s Rising Star — which TVLine readers gave an average grade of “C-“ — drew 5 mil and a 1.5 (based on prelim numbers subject to change to the show’s live nature). That’s good enough for No. 2 in the Sunday demo, but down from ABC’s last stab at a singing show, Duets (6.8 mil/1.7, which bowed on a Thursday).

Opening ABC’s night, Wipeout returned to 3.5 mil/1.0, down 20 and 23 percent from its previous, Thursday premiere, hitting series lows for an opener.

Fox’s Enlisted was decommissioned before an audience of 940K, paired with a 0.3 rating, down 22 and 25 percent week-to-week.

Cable premiere/finale ratings famously come in much, much later, and will ostensibly be reported under separate cover.