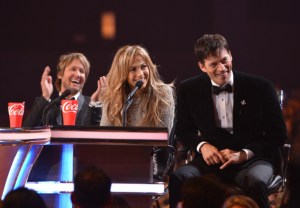 American Idol‘s ratings and cultural relevance might be under siege, but its core team will continue to fight the tuneful fight for Season 14.

Indeed, Fox announced today that Jennifer Lopez, Keith Urban and Harry Connick, Jr. will return as judges and Ryan Seacrest will host American Idol when it returns in early 2015.

“Jennifer, Keith, Harry and Ryan are the very best in the business at what they do, and I’m thrilled that they are returning to American Idol for another season,” said David Hill, senior executive vice president, 21st Century Fox, in a release. “Each brings unique qualities and expertise to the team, but they all share the same passion for helping undiscovered singers achieve the American dream.”

The second stop on Idol‘s Season 14 cattle-call auditions — the round prior to J.Lo, Keith and Harry’s involvement — is set for Wednesday in New Orleans.

No word yet on whether or not Randy Jackson will return in his role as in-house “mentor.”