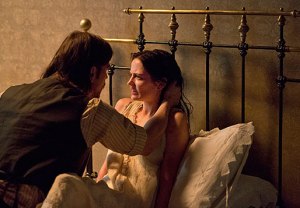 The following contains spoilers from this Sunday’s episode of Penny Dreadful.

Showtime’s Penny Dreadful certainly has its own share of patchwork monsters, but if Sunday’s episode proved anything, it’s that the real monsters look quite human.

ROSEMARY’S CRAZY | It would appear that Vanessa’s calmed down somewhat since last week’s “spinning” episode, as she lies back and ruminates about beauty and death (“To be beautiful is to be almost dead, isn’t it?”) while Malcolm looks unsure whom or what he’s dealing with. When he does speak with her, she unleashes an objects-flying-around-the-room hell until Sembene knocks her out with a one-two punch.

Later, Victor visits Vanessa and gives her a check-up, despite her initial protests (“And where did you receive your medical degree, Dr. Ives?”). The entire (almost charged) exchange plays out like an awkward seduction-by-medical-check-up (“I fear I’m not looking my best.” “Nonsense. Your visual responses are perfectly adequate.” “High praise. No wonder you’re not married.”). But the flirtation consultation quickly ends when a possessed Vanessa teases Victor about his his extra-curricular project. (Side note: Maybe if Frankenstein didn’t spend all his free time reanimating the dead he’d have better bedside manner with the living.)

ELEMENTARY, MY DEAR MALCOLM | Once back with Malcolm, Victor puts on his best deerstalker and quickly deduces the events that led to Vanessa’s current state (with a few Freudian observations slipped in) but he’s interrupted by more than two seasons worth of spiders emerging from under Vanessa’s laid out tarot cards. As the many creepy crawlies swarm both men, they hear a scream from her bedroom.

She’s still screaming when the cavalry Ethan arrives, guns not so blazing. They rush upstairs to find Vanessa doing her best Gollum-if-he-was-possessed-by-the-devil impression before she tells Ethan — who is clearly trying to do his “I can calm a wolf” trick — that they (and Brona) share the same bedfellow: Dorian Gray. Then she has a fit and has to be sedated by Victor (who has quite the morphine problem himself).

THE POSSESSED BRIDE | A week later, Ethan visits Vanessa, only it isn’t Yankee Doodle Eye Candy, but the devil himself. Turns out, the man from the Realm Down Under wants to make her his queen. (And why not? Vanessa is fifty shades of great.) While all of this is happening, the real Ethan shows Victor how to shoot a gun (“Go crazy, Dr. F!”) before sitting down and swapping cooking tips and colonization travel stories with Sembene outside Vanessa’s door. When it’s his watch, Malcolm asks Vanessa to use her tortured state to track down Mina’s real whereabouts — and suddenly it’s unclear who’s worse, him or the devil. Luckily, Ethan shows up and orders Malcolm away, accusing him of doing this to her on purpose, but Victor interrupts to point out she’s dying — clearly Frankenstein would know. Eventually King Lear Malcolm agrees to call in a priest and let Vanessa receive her last rites.

THE LEAGUE OF ORDINARY GENTLEMEN | Only the priest proves useless as Vanessa bites a piece of the man’s cheek off and easily escapes the ropes tying her to the bed. She then quickly dispatches Malcolm and tosses Victor out the door.

Finally, Ethan seems to get through to Vanessa as he calls out her name. But once she emerges, the old Vanessa only begs to be killed. So Ethan reaches for his gun, places the barrel on her chest and… reaches for the St. Jude medal Brona gave him. (Not such a lost cause after all!) As he presses it to her face he busts out some Latin and starts exorcising her himself. (Seriously, who is this guy?) Once she’s back in bed resting, Ethan leaves the building. However Vanessa’s dreams are anything but sweet and the next morning she finds Malcolm and tells him, “I know where Mina is.”

What did you think of Penny Dreadful‘s penultimate episode? Did you miss Dorian Gray? Are you just about ready for answers? Hit the comments with your thoughts!