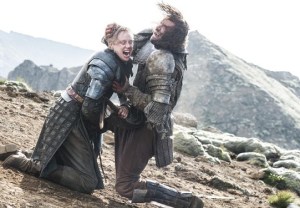 We’ve got questions, and you’ve (maybe) got answers! With another week of TV gone by, we’re lobbing queries left and right about shows including Game of Thrones, Beauty and the Beast, So You Think You Can Dance and Rookie Blue!

1 | Should Orphan Black‘s Mrs. S and Felix have suspected that Sarah was really Rachel? The voice and hair were off….

2 | Was anyone else thinking of this while watching Gwendoline Christie’s impressive swordplay in the Game of Thrones finale? Is there any way we can get a Brienne-Podrick sitcom spin-off where they just wander the countryside? (They could call it The Pod Couple.) And for viewers who don’t read the books, was the finale really any less satisfying?

3 | Considering Devious Maids‘ Ethan once threatened to tell the police that Ty was responsible for killing Alejandro, was he really surprised when Ty decided to blackmail him back? (Side note: Do Opal and Ty get their hair cut at the same place?)

4 | Do The Fosters‘ Callie and Brandon seem too OK with living under the same roof again following their brief relationship? Heck, doesn’t everybody seem too chill about it? Could Wyatt just casually mention the name of the hair products he uses in a future episode? And was it a little too soon to see Bailee Madison with a new father already? (R.I.P., Trophy Wife) 5 | Do you have to remind yourself — nearly very week — that Toronto-shot Beauty and the Beast is set in New York City? Also, why do we not remember Heather looking like she had stepped out of a Dick Tracy comic strip? And was anyone else literally counting the seconds until she got kidnapped?

6 | Did you feel any sympathy for Mistresses‘ Savi during her bruising fight with Harry — or did her argument that he took too long to forgive her indiscretion ring hollow? And while we’re on the subject of Savi’s behavior, ladies and gentlemen: Is there any way in the world you’d have let that shifty Zach character breeze through your front door while you were home alone?

7 | Did 24: Live Another Day’s Navarro actually ring his hit man’s phone knowing that the guy very possibly was in the process of stealthily sneaking up on Jordan?

8 | Could Fargo feds Budge and Pepper live on in a Key & Peele sketch? And how exactly did Gus come away from that non-self defense shooting with not a legal quagmire but a commendation?

9 | Wait, people actually like the Greek chorus that is Awkward‘s Theo and Cole? And even after all the evidence Sadie and Jenna presented against Eva, how is it possible that Matty still trusts her?

10 | How awesome would it be if Chasing Life cast Tim Daly as April’s father in flashbacks? Bonus Wings if Steven Weber and Rebecca Schull are in one with him! 11 | Can Jenna Dewan-Tatum be a permanent member of the So You Think You Can Dance judges’ panel? And is there any way Ricky Ubeda isn’t going all the way to the Season 11 finale? (Watch his audition here.)

12 | How perfect was it that Playing House‘s Mark got drunk off Zimas? And did that revelation cause you to wonder, however briefly, “Do they still make Zima? And do they sell it at a grocery store near me?”

13 | Though you knew it was coming, did Rizzoli & Isles still pretty much insta-wreck you with the two brief scenes writing in Lee Thompson Young’s passing?

14 | Is there a single remotely famous Paris landmark that Perception did not shoehorn into the premiere? Also, the show overdid it with the street mimes juuuust a bit, oui?

15 | As telegraphed as it was, did Graceland‘s jilted wannabe-dad Jakes still punch you in the gut?

16 | After a three-episode build-up to Melissa & Joey‘s wedding, wasn’t it a bit disappointing to see them get hitched in a hospital while Mel was high on morphine? (Side note: When will the cast’s rendition of “I Will Survive” be available on iTunes?)

17 | Considering we’ve waited three seasons for Baby Daddy to finally have Ben find out and Riley acknowledge Danny’s feelings for her, wasn’t it frustrating that she and Danny didn’t actually kiss? And given how considerate Danny’s always been of Ben’s feelings, would it have hurt Ben to privately pull his brother aside and ask him if he still loves Riley? 18 | Who wants to comfort Rookie Blue‘s Nick? (Get in line!) And even the “Swarek” ‘shippers have to agree Nick’s a stand-up guy (he went to find Sam’s sister!), right?

19 | Has there thus far been a more unexpectedly funny summer TV moment than Defiance‘s disgusted Doc Yewll deflecting Datak’s clumsy bid for some “hand action”? Or was the more awkward scene Stahma taking a “special” bath in front of her son?

20 | If you watched the Critics Choice Television Awards, do you prefer that sort of streamlined ceremony over the overproduced spectacle the Emmys tends to churn out? And now that Orphan Black‘s Tatiana Maslany has been recognized twice by the CCTA, are her chances of an Emmy nod even a tiny bit greater?