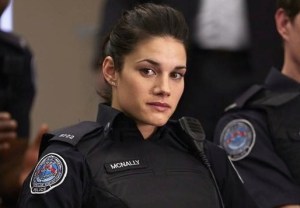 ABC’s Rookie Blue returned to duty on Thursday night with a pair of episodes that averaged 5.7 million total viewers and a 1.0 rating, down from its Season 4 opener (6 mil/1.2) but adding audience versus its September finale (4.7 mil/1.0).

Opening ABC’s night, the relocated Black Box (4 mil/0.7) added a few eyeballs but was flat in the demo.

Leading out of a Game Night rerun, NBC’s Undateable double-pump this week averaged 2.6 mil and a 0.9, down in viewers but steady in the demo. Last Comic Standing then did 4 mil/1.4, up two tenths.

The CW’s two-hour broadcast of the Critics’ Choice Television Awards drew 1.04 mil and a 0.3. (Ausiello is sharing some behind-the-scenes selfies on Instagram, if you’re so inclined.)