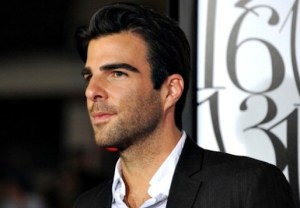 Spock in a smock with Lena Dunham in Brooklyn?

It can only mean one thing: Zachary Quinto has booked a role on Girls.

Indeed, HBO has confirmed that the Heroes and Star Trek actor will guest-star on Season 4 of its edgy comedy, after US Weekly posted this paparazzi image of Quinto and Dunham filming a scene yesterday in shapeless blue aprons emblazoned with the message “Ask Me My Name.”

While the network was unable to provide details about Quinto’s role or character name, sources tell TVLine that it’s a one-off stint.

Season 3 of Girls ended with Dunham’s Hannah Horvath getting accepted to the prestigous Iowa Writers’ Workshop — but the fact that Dunham and Quinto filmed their scene in the hipster enclave of Bushwick indicates at least some of the season will take place in New York.

The presence of a large gray trash can and a clear plastic bag of recycled beverage cans in the backdrop of the photo indicates that perhaps Hannah is exploring her altruistic side through some volunteer work. Either that, or she’s engaged in some court-ordered community service. (Yeah, the latter seems more likely, doesn’t it?)

Post your own theories — and your thoughts on a Quinto-Girls pairing — down in the comments.