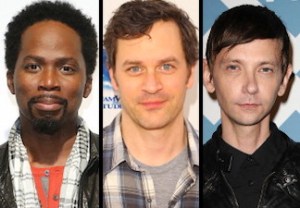 Syfy is getting in on the zombie craze, and as such has announced the cast of its upcoming action-horror series, Z Nation.

Harold Perrineau (Lost), Tom Everett Scott (Southland) and DJ Qualls (Supernatural) have joined the 13-episode series, which follows a team of everyday heroes three years after a zombie virus has devastated the country. Together, the group must transport the only known survivor of the plague from New York to California, as he is their only hope for a vaccine.

Perrineau will play Hammond, the leader of the group headed west. Scott portrays Garnett, Hammond’s second-in-command, while Qualls has been cast as Citizen Z, a computer hacker who joins the team and helps them navigate the zombie-infested country. UPDATE: A WBTV rep assures TVLine that Perrineau is very much a series regular on NBC’s Constantine, premiering Oct. 24.

Currently in production in Spokane, Wash., Z Nation debuts in the fall.