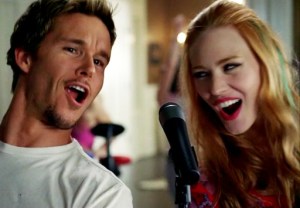 The fanged fatales of Bon Temps have turned maiming and killing into a fine art — but can they sing?

That’s what we’ll find out if True Blood composer Nathan Barr‘s dreams of a musical based on the HBO series ever become a reality.

“This was something that I pitched to HBO and [creator] Alan Ball,” Barr told the Associated Press on Tuesday at the show’s Season 7 premiere in Los Angeles.

Barr said his proposed True Blood musical would revolve around Sookie — somewhere, Pam is rolling her eyes — and her life as a vampire-loving telepath, noting that he’s “really going to try to return to the roots of the show.”

Though Barr hopes to workshop his musical in a year’s time, he hasn’t spoken with anyone about actually bringing the show to Broadway. Yet.

[Editor’s note: Before you get all up in arms about how crazy this sounds, just remember there’s currently a musical about Rocky on Broadway — and it’s huge.]

OK, let’s have some fun with this: Drop a comment with your suggestions for songs in True Blood: The Musical below.