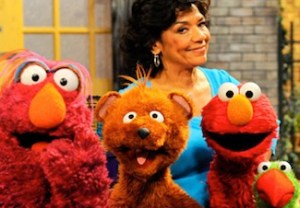 In response to the way kiddies now consume content on digital devices — and to offer said audience more viewing options — PBS is developing a streamlined, half-hour edition of Sesame Street.

As first reported by the New York Times, starting Sept. 1 PBS will add to its afternoon line-up a 30-minute edit of that morning’s hour-long Sesame Street, keeping elements such as “Word on the Street” and letter- and number-themed “dance breaks,” while excising the lengthier, more-serialized segments (e.g. “Abby’s Flying Fairy School”).

PHOTO | Disney Channel Reveals the Descendants of Maleficent, Cruella and Other Villains

As PBS execs explained to the Times, the 60-minute Sesame Street “didn’t lend itself” well to mobile viewing, while the additional, half-hour broadcast will allow the 45-year-old series to “expand its footprint” and offer preschoolers “a great alternative” in afternoon TV.

I close with a fun fact nestled in PBS’ official press release: “A longitudinal study by the University of Kansas found that American children who frequently viewed Sesame Street as preschoolers had high-school grade point averages that were almost 16 percent higher than those who did not watch.”