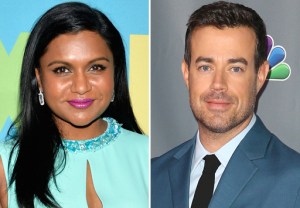 As it turns out, Mindy Kaling and Carson Daly are a match made in Emmys heaven.

The Mindy Project star and Voice host will come together Thursday, July 10, to announce the 66th Primetime Emmy nominations. The announcement will be streamed live on Emmys.com, beginning at 5:40 am PST.

* ABC Family’s Mystery Girls is staging (another) 90210 reunion with the addition of guest-star Joe E. Tata, who co-starred with Jennie Garth and Tori Spelling on Beverly Hills, 90210. Spelling first shared the news on Twitter.

* Nickelodeon has renewed Teenage Mutant Ninja Turtles for a fourth season, slated to premiere in fall 2015. Season 3 begins this fall.

* Jay Leno will receive the Kennedy Center’s Mark Twain Prize for American Humor during a special scheduled to air Nov. 23 on PBS.