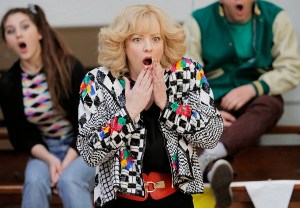 The Goldbergs‘ Wendi McLendon-Covey is one tough smother.

As Beverly, the overprotective, overbearing mama of the ABC comedy clan — based on creator Adam F. Goldberg’s own family — McLendon-Covey has mastered the art of mixing extreme love with laughs, earning the actress a Critics Choice Award nomination along the way.

With Emmy Award season upon us, TVLine spoke to McLendon-Covey about getting into mom mode, dancing up a storm and those impressive roller skating skills.

RELATED | Eye on Emmy: Kaley Cuoco on One of Big Bang Theory’s Biggest Moments Ever: ‘I Had Chills!’

TVLINE | Much has been made about the fact that Adam’s mom — the real Beverly — sent you her ’80s sweaters. What was your reaction when you got that package?
Well, she sent it to the wardrobe department, so I had no idea I was wearing her sweaters for a while. But then it just took on a whole new meaning for me. And she wants them back when the show ends! [Laughs] She’s very attached to those things. I thought that was very nice of her. She’s being very supportive of the show.

TVLINE | You’re playing a real person, but a heightened version…
It’s not heightened. It’s actually toned down. [Laughs] She’s quite a spicy gal.

TVLINE | Do you feel an obligation to do her justice?
I do. I want people to like her because I don’t think she’s a bad person. I don’t think she’s a bad mother. I think she was doing the best she could at a time when there was no Dr. Phil. Nobody knew what they were doing. Everything she does is motivated by love for her kids. She’ll react first and think and apologize later.

TVLINE | You were a member of the Groundlings alongside Melissa McCarthy and Kristen Wiig. Has that training come in handy on The Goldbergs?
That training has come in handy on every job I’ve ever been on. [On] The Goldbergs, we don’t improvise that much. We have really great writers, so the writing doesn’t need to be punched up. If I improvise at all on The Goldbergs, it’s with the physical stuff. But my Groundlings training has come in handy, like I said, with every job I’ve done because you have to learn how to give someone else their moment and how to listen and respond appropriately.

RELATED | Eye on Emmy: The Americans‘ Matthew Rhys on Philip’s ‘Awful’ Explosion and That Sex Scene TVLINE | Is there an example of when you improvised something with your physicality?
Our second episode, with the roller skating. No one knew I actually can roller skate. The whole thing was that Barry thought he was a master roller skater. It was like his secret. So the whole family shows up at the roller rink, and at one point, I’m doing a move where I’ve got my leg in front of me and I’m saying, “Hi, Barry! Look at mommy. Look at how much fun mommy’s having. Barry, look at mommy.” How humiliating for a kid that mom is actually a good roller skater and she’s saying, “Look at mommy.” And the dancing episode where I crashed the school dance dressed [the same] as Adam. All they write in that situation is, “Beverly comes in and dances.” Well, they don’t know how I’m going to do that. So I push it until they tell me to stop. [Laughs]

TVLINE | There are so many great dynamics between Beverly and the family. Is there one in particular you enjoy playing?
I like the relationship between Beverly and Erica, because Erica – although she’ll never admit this – is kind of a little Bev. So that’s fun to play. Not only that, but Hayley Orrantia, who plays my daughter, is a great actress. We have a really good time together. TVLINE | Looking back at Season 1, do you have a favorite scene or episode?
The school dance episode, when Beverly leaves the dance floor because the slow song has started and Adam is dancing with his little girlfriend. She’s standing at the door watching him, and it’s just killing her to see this. She’s there for her baby’s first dance, and what Beverly is thinking is, “Why isn’t he dancing with me?” [Laughs] But she has to let him do this.

TVLINE | Next season, you’re going to be sandwiched between The Middle and Modern Family.
Which makes sense. It makes a lot more sense that we’re in between two comedies instead of following up an hour-long drama. [Laughs] But we found our audience anyway. I think it’ll just get better.