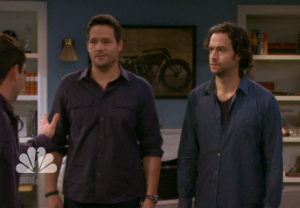 Undateable‘s Danny has got some ex-plaining to do. Emphasis on the ex.

In this clip from the NBC comedy’s second half-hour (Thursday, 9:30/8:30c), Danny is caught hanging out with his sister’s former husband, Julius (played by Cougar Town‘s Josh Hopkins), and he’s not showing any signs of remorse.

And despite Justin’s usual attempts to talk some sense into his roommate, Danny has no plans to end his friendship with Julius. Even if Julius is — dare we say it? — better-looking.

Press PLAY on the sneak peek below, then hit the comments with your thoughts.