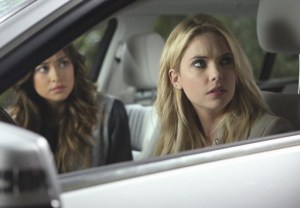 Last week, Hanna called 9-1-1. This Tuesday, the girls willingly went to the police station. Have the Pretty Little Liars finally realized they can’t take down “A” on their own?

Don’t be ridiculous, Alison merely sold Detective Hotbrook (not a typo) on some wild story about a kidnapping. The other girls, unsurprisingly, had a much more difficult time keeping their stories straight.

CAN YOU DIG IT? | The mystery of Mrs. D’s “disappearance” also thickened this week, and all manicured fingers pointed to Jason. Hanna and Emily even tailed Spencer’s half-bro to one of Rosewood’s sketchier districts (yes, they exist) but ultimately came up empty handed. Spencer confronted Jason at the end of the hour with the group’s theory, only to be interrupted by a troubled cry from Pepe — Ali’s new dog, who’s totally trying to make fetch happen — as he made an interesting discovery ‘neath the DiLaurentis’ front lawn: Mrs. D’s body! Now that the gang knows Ali’s mom is dead, it’s time to hunt down the killer. (If history is any indication, we should have our answer midway through Season 15.)

WOMEN’S MURDER CLUB | Fresh off her own first kill, Aria spent the hour slowly descending into madness — her hair was, like, the least beachy it’s ever been — until Emily, who has also taken a human life, sat her down for some real talk. Don’t you just love bonding with your friends over shared experiences… like murder? EMPTY HEADS/THREATS | Mona, meanwhile, acted like she doesn’t know everything that happened to Alison by handing out whistles to prevent further “kidnappings.” She also cornered Ali at the mausoleum — Rosewood’s latest hotspot, apparently — and told her, “You’re going to wish you stayed dead.” (Ironically, Ali really could have used one of those whistles during her confrontation with Mona.) Also, I won’t even bother commenting on how much of a handsome, grown-up man Mike was this week. I’m pretty sure Twitter took care of that for all of us.

HOT SPOBY ACTION | This week’s episode also featured the long-awaited return of Toby, as well as the long-awaited absence of Toby’s clothing. (I knew there was something missing from the season premiere!) Melissa apparently lied about seeing Toby in London because, as Toby explained, Wren answered the door to her apartment. Or should I call it a “flat”? Sorry, I’m too preoccupied wondering which other off-screen characters might also be in London right now. Could that be where Sean disappeared to?!

PLL fans, any thoughts on this week’s episode? Who could be playing that freaky violin music? Who killed Mrs. D? And, seriously, who else is in London?! Drop your theories in the comments section below.