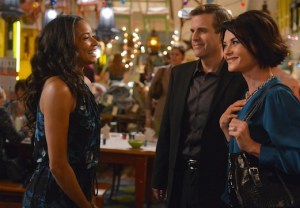 Question: Which Mistresses character is most likely to blithely answer the door for a suspicious (albeit hot) stranger who showed up at her open house a few days prior and is now aggressively ringing her door bell (not a euphemism)?

RELATED | Eye on Emmy: Lizzy Caplan on Keeping Masters of Sex Dangerous (and Why Season 2 Is Off-Limits to Her Family)

Answer: Karen Kim — AKA The Therapist Formerly Known as “Falls in Love With Her Married Patient, Beds His Son and Then Participates in an Altercation That Ends With the Son’s Death and His Dangerously/Deliciously Soused Widow in a Hospital for the Criminally Insane.” (Like with Prince, there ought to be a symbol for that, no?)

Shockingly enough, however, we are not paging Dr. Kim to the naughty corner for blatantly disregarding basic 48 Hours: Mystery warning signals. Instead, it’s Alyssa Milano’s Savi making us shake our damn heads — and not just because she’s seemingly adding another set of bulging pecs to her lust (typo — I meant to say “list” — but “lust” works, too) of peccadilloes.

In the meantime, Karen’s acting relatively tame (while still managing to be a world-class embarrassment — just the way we love her); Joss is acting as an unwilling go-between; April is acting as though paint splatters and high-end home furnishings are the new chocolate-and-peanut-butter; and that strumpet Toni Taut and Tanned (™ pending) is acting like a quaint farmer’s wagon at the entrance of a supermarket produce section — her ripe melons heaving themselves toward Dom and cooing, “Squeeze us, we’re ripe!”

Side note: I just Googled “ripe melon test” — and apparently, you’re supposed to “thump, sniff and touch.” So, before this recap gets slapped with a TV-MA label, let’s recap the action from the hour, while raising key questions about each of our titular Mistresses.

APRIL | It says something about April that she gets saddled with the week’s most predictable storyline — one that doesn’t include Ricky Whittle’s torso (booo!) — and still manages to delight me in every possible way. With daughter Lucy having won a scholarship to a prestigious private school, our single mom develops rich people’s problems — symptoms of which include hosting a fundraising soiree that you think is going to be about pizza and beer ’til you realize you’re supposed to have a proper theme, a swanky setting and a variety of cocktail options. Even worse, Lucy’s showing up at Maison Per La Mer with a bitchy classmate who scoffs at April’s apparently gauche suggestion that they might head to the mall. Said moppet then uses her iPhone to schedule a one-hour cocktail sesh for her parents and April. (Yikes!)

No worries, Mickey to the rescue! Suddenly, April’s shop is adorned with shirtless guys splattered in paint, colorful shot glasses and an eager dad who’s making an”Eyes Wide Shut” joke at the exact same time as April. She agrees to meet the guy for morning beverages after Mickey chides her for putting all her eggs in Daniel’s basket — pause while you recover from that imagery — but it turns out the dude is kinda creepy, rambling on about his money, his cars and his “generosity.” (Was he trying to “buy” April’s affection? Aw hell, no!) April deftly dodges his pre-noon kiss, but when Peyton’s parents show up for drinks the next day, guess who her dad turns out to be? Yep, it’s the disastrous coffee date, still sniffing around like a randy hound. All’s well that ends well in the Malloy household, though, as April buys Lucy an iPhone, then realizes her daughter had tampered with her own phone’s settings — temporarily blocking a flurry of texts from Daniel. He’s still got her on his mind, just like she’s got him on hers, just like we’ve got that sex-on-a-canvas scene of theirs on ours.(#nobodyssupposedtobejudginghere)

Key questions: Are we getting another scene with Peyton’s parents soon, because nothing is better than an April “Y’all can go back to the Florida swamp you crawled out of” Malloy smackdown. Also: How come we didn’t get a scene of Daniel on the phone with April, lying shirtless in front of his Vermont fireplace on a bearskin rug? (You know you wanted it, too, so save your side-eye for somebody else.)

SAVI | Just as the open house at Savi and Harry’s “Four Bedroom, Divorce Special! Spectacular” comes to a close, a hottie in a blue t-shirt arrives. His name is Zack (Jason Gerhardt), and he can’t take his eyes off the soon-to-be-ex woman-of-the-house. Alrighty, then! Back at the office, Toni’s asking questions of her office-mate: You single, married, gay? “We should go out,” she coos, “as singles, not as lesbians.” But we know that trollop is up to no good, and sure enough, when Savi misses a big work meeting due to some real-estate woes (angering Dom in the process), Toni swoops in, acting all innocent and complaining about how Savi keeps getting visits from her sister, taking meetings with her realtor, and fielding “constant personal calls” — especially from Harry. Selling out a coworker clearly ranks as one of Toni Tumbling Out of Her Scoop Neck’s turn-ons, because suddenly she’s backing Dom into a corner (literally) and suggesting they put the “oooh” in their “soooohpervisor-employee” relationship. He tells her it’s not gonna happen. She asks if he’d be willing to forget the whole thing. He says sure. Somehow, this leads to her putting her hand on his chest. (Not that I blame her, but when was the last time you did a pec-check on your boss? I mean…)

Meanwhile, Savi confronts Harry about accepting an offer on their house without consulting her — and he refuses to concur with the notion that they can converse like civilized adults. “I’m not trying to hurt you — I’m trying to get rid of you,” he says. When Savi suggests her choosing to be with Dom doesn’t negate the life they had together, Harry roars back: “Of course it does!” She humiliated him not once, but twice, he says, calling Savi “the most selfish woman I’ve ever known.” The whole showdown is a bruising one, but Savi takes one final swing, reminding Harry that he cut off communication with her for weeks, then only returned to fight for her when he thought she might die. She made mistakes, she acknowledges, but so did he. The question is, though, is she about to make another: The episode ends with Zack returning to Savi’s house — clearly he knows who she is — and dropping this head-scratcher: “We need to talk.” Could he be a long-lost brother? A future lover? A creature from another planet wearing a handsome human disguise? I suspect we’ll find out next week.

Key questions: Anyone else detect the wistfulness in Savi’s voice when she told Joss you “can’t hold onto something that doesn’t exist anymore” (re. her relationship with Harry). And wasn’t it interesting how Dom didn’t share Toni’s come-ons after Savi copped to being a little paranoid about her coworker’s intentions?

JOSS | Joss, who is definitely in contention for a special Emmy in zinger-dropping, nevertheless needs more to do than serve as a messenger in Savi and Harry’s divorce proceedings — or as a sounding board for Karen’s return to the vanilla end of the dating pool. ‘Cause that sums up her very unexciting week. (Remember when she was into Japanese rope bondage?)

Key questions: Has anyone ever hit a punching bag with less vigor than Joss? Note to the episode’s director: No way girl gets a body like that without a pit-stop at Perspiration Avenue. (#ithadtobesaid)

KAREN | Karen has the best life ever, no? She has to end her weekday coffee date with Joss to go to another weekday coffee date with former coworker Jacob (AKA “Not Believable as a Therapist Because That Sexy Jawline Is Way Too Distracting”). Turns out Jacob only reported Karen’s malpractice to the board (whatever board lets you destroy an entire family’s life with nothing more than a wrist-slap) because he was upset she didn’t reciprocate his verrrrrry obvious feelings for her! “What?” asks Karen, as if someone has just told her that what she always thought was a mango is actually a loaf of rye bread. “My profession is all about reading people!” she says to Joss later on when they’re at the gym, without coming to the realization that SHE IS TERRIBLE AT HER JOB. After a blah date with a former coworker, though, Karen admits what she really wants is to explore her feelings for Jacob. And so she calls him — after much wine-sipping and much hilarious practice — only to get shut down. “Why don’t we get lunch some time — as friends?” he asks, sensibly. But the thing that slays me is that when they cut to Jacob in an outdoor shot, it’s the middle of the day!!! So, yes, Karen is guzzling her chardonnay at home in the afternoon — or maybe the late morning!!! Like I said, she has the best life ever!!! (And sorry for all the exclamation points.)

Key questions: When is Karen going to start to act like a high-priced call girl, the way the ABC promos keep promising? Because these first three episodes of Season 2, she’s just been a basic mess, when we know her game is world class! Am I right? Of course I’m right. And yes, you know she was picturing Elizabeth’s dead husband’s face when she was screwing his son.

Best Zingers
“When was the last time you were even on a date — I mean, a real date that wasn’t with a patient or his kid?” –Joss, summing up a few of Karen’s life problems

“It just doesn’t feel right.”
“Well, it certainly looks right — and I say that as a former lesbian.”
Joss, summing up Karen’s date-night look

“He took me to a pool hall: We ate buffalo wings.”
“Please tell me that he made up for his poor dining choices by being a voracious lover?”
Joss, hoping Karen’s awful date story is going to have a happy ending (so to speak)

“Seriously, do they make their iced tea in India?” –Joss, wondering how long a gal has to wait for a cold beverage

What did you think of the “Open House”? Which of our four ladies is getting the most intriguing setup? And what’s your theory on this Zack character? Hit the comments with your thoughts!