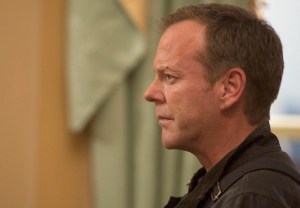 The following recap, by the very definition of the word “recap,” contains spoilers from this week’s 24: Live Another Day. All typing occurred in real time.

It is remotely conceivable, being the twisty-turny world of 24, that what happened at the close of this Monday’s episode did not, in fact, happen.

But assuming for the time being that it absolutely did… wow. RIP, POTUS.

When it was announced a small eternity ago that William Devane was on board for 24: LAD, I admittedly shrugged. Love the actor, but SecDef James Heller was never a favorite character. Maybe I held it against him the way he gave Jack the cold shoulder during the whole catatonic Audrey mess.

But as President of the United States for this fateful day, he got my vote — never more so than in these past couple of hours, when Heller did not pull the expected bullheaded, boneheaded 24 ‘move (e.g. I will hide my impairment and forge ahead!) and instead acknowledged the liability he soon enough would become and decided to sacrifice his life for the greater good. “The needs of the many…,” as Spock (or, you know, Dickens) put it.

Along the way, during this week’s hour, Devane was frickin’ on fire, whether bellowing his stance on this ultimate sacrifice, saying a discreet farewell to daughter Audrey (a moment that could have been hokey but instead rang sweet) or letting fly with Greek chorus-type zingers. (The one about Jack’s skills as a surgeon? Awesome.)

If this was in fact the last we’ll see of Devane — I don’t know how it’s not, but: 24! — I applaud his eight-episode term as POTUS. It was nice to not have a sneaky, snaky commander-in-chief for the show’s unexpected revival, but rather one more in the tradition of David Palmer. (Even weasely Mark was allowed a redemptive moment, choosing service to his president over some jealousy-fueled sabotage of Jack’s plan.)

The rest of 24‘s 200th episode was equally intense — even poor Jordan Reed’s evasion of, and brief drop on, the hitman sent by Navarro. Sad he fell for the ol’ “Is the safety on?” trick (groan), but I trust Jordan will come to, use the killer’s cell to alert Kate to Navarro’s betrayal… etc. (P.S. to Navarro: Did you really ring your cleaner’s phone, knowing he likely was in the midst of sneaking up on his target? Bush!)

The question moving forward, though, is: Did that epic kill satisfy Margot? Lord knows, Ian is happy to egg Mom on. (Ian wants to smash stuff!) And maybe that last look at Margot was to suggest that she finds herself oddly… dissatisfied. Or, will her vengeance be reignited by news that Simone died in CIA custody? (Forgetting for a moment that her stonehearted mom tried to kill her herself!)

How do you think 24: LAD will flesh out the final four episodes/16 hours (and yes, the last episodes will span 16 hours) of the day?