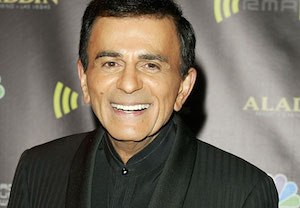 American Top 40 icon Casey Kasem, who carved out a lucrative side career providing the voice of Shaggy in the Scooby-Doo franchise, died early Sunday after a long battle with Parkinson’s disease. He was 82.

Kasem’s daughter, Kerri, shared the news on Twitter. “Early this Father’s Day morning, our dad Casey Kasem passed away surrounded by family and friends,” she wrote. “Even though we know he is in a better place and no longer suffering, we are heartbroken. Thank you for all your love, support and prayers. The world will miss Casey Kasem, an incredible talent and humanitarian; we will miss our Dad.”

In addition to voicing Shaggy in Scooby-Doo‘s various TV incarnations, Kasem’s distinctive voice could be heard on Sesame Street as well as a number of commercials.