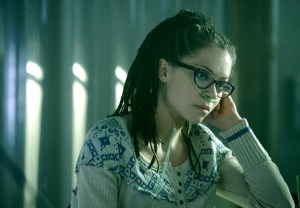 We’re nearing the end of Orphan Black‘s sophomore season — nooo! — and this Saturday’s episode brought us a Helena showdown and one step closer toward saving Cosima.

Last week’s trans outing got some criticism in the comments, but for me, this was the first episode of the season that didn’t quite work. It wasn’t bad — because even a less-than-successful episode of Orphan Black is still an interesting one — but it didn’t have the momentum and progress you’d expect from a penultimate hour.

Still, there were some significant developments — a victory for Donnie! — so let’s review the action:

SARAH & RACHEL | Rachel makes Delphine interim director of the program because she’s “uniquely qualified,” and because she needs Delphine to plead their case to Sarah. But as Mrs. S points out, at the end of the day, the choice of whether or not to donate bone marrow to Cosima is Kira’s. The little girl doesn’t want her auntie to die, so she agrees, but Sarah and Mrs. S will only let her go through with it on their terms with their own security at a private pediatric clinic. “What kind of mother am I?” Sarah tearfully wonders as Mrs. S’ doctor friend inserts a giant needle into her daughter’s hip. “The best, the bravest,” replies Delphine. “And a very good sister.”

Meanwhile, a “bereft” Rachel assures Marion that she “know where our girls are, and I’ve only just taken charge.” She heads to a private room to enjoy her cocktail and watch home videos. The release of laughter and tears is enough to make her start slapping herself back to stoicism. She then tries on a hoodie as she stares at a picture of Sarah. You could see the writing on the wall as to Rachel’s plan, which made the twist that she compromised Benjamin in order to sneak into the hospital and kidnap Kira not that shocking. Also, Mrs. S and Felix really should have picked up on her iffy imitation of Sarah’s accent. Kira wakes up in the definition of a little girl’s room, all pink and pretty princess. “You’ll get used to it. You may even grow to like it here, just as I did,” Rachel tells her. Is this Rachel’s old bedroom at Dyad? HELENA | Finally, she’s back – and she might be preggers! Helena’s become a part of Henrik’s twisted family, spending time at the nursery/preschool where she bonds with a little girl. But when one of the caretakers spanks the girl, we see that the old Helena is still in there. She pushes the woman up against the wall. “You touch her again, and I will gut you like a fish,” she threatens. Meanwhile, Henrik says it’s time for Gracie to bear fruit – shudders – and asks Mark if he’s ready to stand by her as her husband. But he impregnates his daughter with his and Helena’s babies, as well as the other women. Unlike Helena, we’ve been listening, so this isn’t a huge surprise. Gracie and Helena bonding over their disapproval of what Henrik’s done – “You love her like puppy, but you let him make her broodmare,” Helena says to Mark – and trying to run away together, however, is. Unfortunately, Henrik stops them and locks up Gracie. Mark stumbles on the scene and finally stands up to Henrik. “You had to put your own child inside of her? You had to be the father, too?” he says before letting Gracie go as Helena attacks Henrik. Let’s just say Helena ends up giving Henrik a taste of his own treatment before burning down the farm. (But his wife is still out there somewhere…)

ALISON | Donnie wants to dump Leekie’s body in the lake, to which his wife hilariously replies, “Do we have a boat?! Have you ever seen Dexter? Random scuba divers are finding everything!” They decide to bury him in the garage instead, which has its own set of challenges like Donnie can’t bulldoze the cement. Don’t fret, Alison steps in and does it easily. Then Vic comes snooping around the garage. Donnie walks up behind him with a gun and manically threatens to shoot him until Vic confesses Angie’s outside in a van. Turns out Donnie was just bluffing, not that it makes Vic feel any better (“God, I hate this garage”). Donnie pops into the van to confront Angie. “All these women, and you just can’t put it together,” he says. “You don’t want to know what we know. If you come near my home or my family again, I will bury you. Smile” – he snaps a photo of her and Vic – “Have a shitty day.” With that, Donnie walks off so very proud of himself – and he kind of deserves to be. He finally did something right! Alison is pleased, too, when he draws a heart in the wet cement over Leekie’s body. “I have never been more attracted to you than I am right now,” she says breathlessly before they start going at it. “I want to be nasty.” (So much for Alison never having done the nasty!) While I thoroughly enjoyed the dark humor of Alison and Donnie’s story, I miss her interaction with the other clones. Their brief Skyping scene and Alison lamenting how wrapped up in her own problems she’s been just reinforced how isolated the character has been from the main action.

Orphan Black fans, what did you think of the episode? Got any theories as to what Rachel wants with Kira? And where are Hot Paul and Cal?!