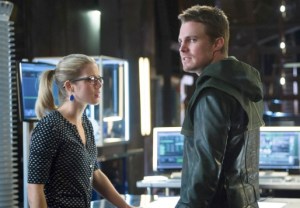 The CW’s Arrow has in its sights for Season 3 at least two new pot-stirrers — one of whom will cozy up to a lady in Oliver Queen’s life.

TVLine has learned that casting is underway for four new characters, two of whom will figure into Oliver’s next stretch of flashbacks. Review the details below then hit the Comments with your theories on the new baddies (including who you would cast as you-know-who’s new beau).

‘DANIEL’ | Though Daniel could be a fake name to throw off spoilerholics, this 20something gent — a major recurring character for Season 3 — is a handsome, enigmatic and highly intelligent entrepreneur developing groundbreaking technology. (Picture a business magnate in Ryan Gosling’s body.) Though exuding charm and confidence in public, he privately harbors a tragic past that will drive him to become a tech-powered superhero. Watch for this formidable fella to be a love interest for Felicity and a rival of Oliver’s – both personally and professionally.

‘SETH’ | A well-educated criminal with grand ambitions and a knack for chemistry, this potentially recurring character gains power over his enemies by exposing them to a drug that drains their willpower. Oh, and he is very much a physical match for The Arrow.

TOSHI | Majorly recurring in (at least) the Hong Kong flashbacks, Toshi (late 20s/early 30s) will serve as Oliver’s teacher and handler, and eventually become a friend. A well-trained operative, skilled in weaponry, combat and intelligence gathering, he is also a devoted father and husband.

AKIKO | Toshi’s wife is another of Oliver’s Hong Kong caretakers, and is herself highly skilled in martial arts.