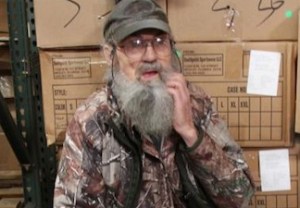 Duck Dynasty is no longer quite what it was once quacked up to be, yet it still topped Wednesday’s cable ratings.

Drawing 4.6 million viewers to its Season 6 premiere, paired with a 1.8 demo rating, the A&E series dropped more than 40 percent from its previous opener, hitting its lowest numbers since fall 2012 (our sister site Deadline denotes). But it still easily was Wednesday’s No. 1 cable program, with NBCSN’s coverage of the Stanley Cup Finals (3.4 mil/1.3, per TV by the Numbers) a distant second.

Elsewhere on Wednesday: USA Network’s Suits launched Season 4 with 2.5 million viewers and a 0.8 rating, on par with this past winter’s midseason premiere and up from April’s finale (2.4 mil/0.7), but down from last summer’s Season 3 opener (2.9 mil/1.1), which aired on a Tuesday.