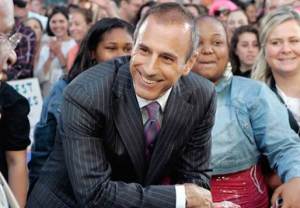 Matt Lauer will be spending many more Todays at NBC.

The network’s embattled AM leading man has extended his contract with the morning show for several more years, the New York Times reports. (According to sources, his new deal is for three years.)

The news comes after the once-mighty Lauer weathered a rough couple of years at Today, during which he presided over the rocky departure of former co-anchor Ann Curry and saw his show cede its ratings crown to Good Morning America.

“I consider this the best job in broadcasting,” Lauer said in a statement. “I love people I work with every day and I have such respect and gratitude for the people I work for. I couldn’t be happier to be staying.”

Terms of Lauer’s new pact were not disclosed, but his previous annual salary was in the neighborhood of $25 million a year.