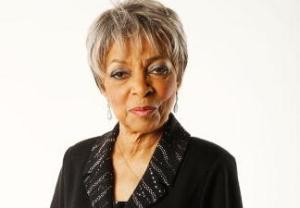 Celebrated actress Ruby Dee “took her final bow” and died of natural causes on Wednesday at her home in New Rochelle, N.Y., her daughter Nora told The Associated Press. Dee was 91.

In addition to being an actress on stage, screen, TV and radio, Dee — often alongside second husband Ossie Davis, whom she met in 1945 while (successfully) auditioning to star opposite him in the Broadway play Jeb — was an activist who fought for civil rights.

Her most recent TV project was narrating the Lifetime move Betty & Coretta.

Dee’s illustrious big screen career included but was by no means limited to The Jackie Robinson Story, A Raisin in the Sun (in which she and Davis reprised their roles from the original 1959 Broadway production) and 2007’s American Gangster, for which she earned an Academy Award nomination.

Dee is survived by her and Davis’ three daughters and one son. Davis passed in 2005.