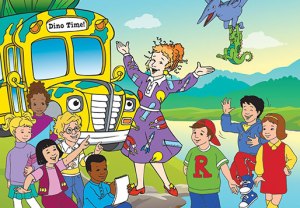 Ms. Frizzle and the Magic School Bus gang are heading back to class.

Netflix announced Wednesday that it will launch The Magic School Bus 360°, an original computer-animated series based on the popular 1990s cartoon.

The animated reboot will feature a modernized Ms. Frizzle and her elementary school class, who use a high-tech bus to explore the wide world of science.

“The Magic School Bus revolutionized kids’ television through a unique and powerful blend of entertainment and science information,” Scholastic Media President Deborah Forte said in a statement. “The Magic School Bus 360° is a similarly compelling addition to the current landscape of children’s programming and on Netflix is bound to reach more families around the world than ever before who will now be able to watch the show anytime, anywhere they want.”