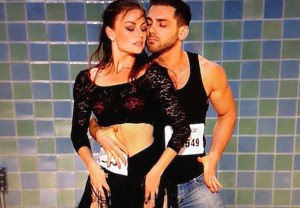 Kids are the best: They say the darndest things. They’re a source of seemingly unlimited energy. They’re not at all embarrassed to laugh at fart jokes. The thing is, though, I don’t really care to see them participate in reality-competition series.

I mean, if a child succeeds in this cutthroat genre, I’m left thinking, “What will fame and fortune do to his tiny ambitions? Will he stop focusing on his studies, his brain atrophying like a Kardashian in a no-paparazzi zone, his taste for the spotlight growing two sizes too strong?” And if a child falls flat on her face on the small screen, I wonder if she’ll be able to overcome the trauma of her failure getting broadcast, hashtagged and YouTubed like tattoos across her psyche.

I’m reminded of these worries every time So You Think You Can Dance bends its 18-and-over age requirement and allows a wee one to take the stage during its audition-tour episodes. (There’s at least one in every city, no?) Tonight, humorless 9-year-old “J-4” — I just caaahhhhn’t with that name! — seemed all too aware that his clipped answers and pint-sized swagger would get him his first five minutes of fame. Of course, the judges told him from the get-go there was no chance he’d be headed to the Los Angeles callbacks, but then rewarded him by letting him share the stage with Season 10 champ Fik-Shun and Season 9 runner-up Cyrus.

Call me crazy (or more accurately, grouchy), but I wish the show had used the kid’s segment to instead show us some of the L.A. ballroom types or Philadelphia fellas (especially the bearded guy in the white Henley) who got crammed into dreaded montage segments. I mean, what exactly is the point of those montages when we don’t get contestants’ names or see more than fleeting seconds of what they can do, anyhow?

OK, before anybody shakes a fist at me and asks “What about the children?!”, let me get to the business of naming my Top 5 auditions from the Los Angeles-Philly audition telecast:

Honorable Mention: James “Banks” Davis (the “slow krumper” who looked like he was getting out his feelings through an invisible molasses seas) and Alla Kochenga and Serge Onik (fast, furious and flexible ballroom duo who could easily trade places with my No. 1 pair tonight).

5. Johnny Waacks | The shocking precision of his movements — capped off by his “conducting” a chorus of a cappella Whitney Houstons in a “How Will I Know” remix — was riveting. This is how you serve arms, face and attitude — even if it means you need to prove yourself in choreography before advancing to callbacks. (Insert side-eye here.)

4. Stanley Glover | Self-described “creature” put the “unique” in “technique” — contorting his body into insect-like shapes and serving up expressions that ranged from goofy to menacing in the process. It’ll be interesting to see if his one-of-a-kind energy works in a pairs setting, but the kid is definitely a riveting presence.

3. Jourdan Epstein | Ballerina whose brother overcame addiction showcased jaw-dropping physical strength along with the ability to paint vivid pictures with every pose she struck, every movement she articulated. As Christina Applegate noted, even “the stuff in between the other stuff” was mesmerizing.

2. Amir Sanders | I’m not a keen-eyed student of dance, so I’m not entirely sure why the “funky ballerina” was forced to prove herself in choreography before advancing to Los Angeles, but whatever the case, I loved the way her grace and crispness juxtaposed with her quirky facial expressions and occasionally jarring sidebars. Uncle Nigel wouldn’t have given the chick her own hashtag if he wasn’t planning to make her a member of the Top 20, right?

1. Armen Way and Marlene Ostergaard | Armen, who seemed to get unfairly brutalized by the judges for dropping his partner in Vegas last season, roared back with one of the most expressive pieces of ballroom work I’ve seen in SYTYCD’s audition rounds. The sexual tension between Armen and Marlene was so palpable, it reached right through the TV and took a sip of my sauv blanc to cool itself off. The grown-and-sexy quality of this 28- and 25-year-old duo was a nice contrast to the teen-tastic energy to which the show’s judges seem partial, no?

What did you think of tonight’s SYTYCD Philadelphia and Los Angeles tryouts? Who were your favorite auditioners? Sound off in the comments, and for all my summer TV news, interviews and recaps, follow me on Twitter @MichaelSlezakTV!