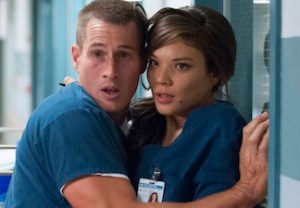 ABC’s coverage of the NBA Finals Game 3 on Tuesday drew 14.8 million total viewers and a 5.9 rating (per finals), dominating the night in the demo and on par with Sunday’s Game 2.

Going up against the hoops action at least in part, NBC’s America’s Got Talent (11.5 mil/2.6) added a few eyeballs but dipped 7 percent in the demo, while The Night Shift (6.7 mil/1.5) stayed steady.